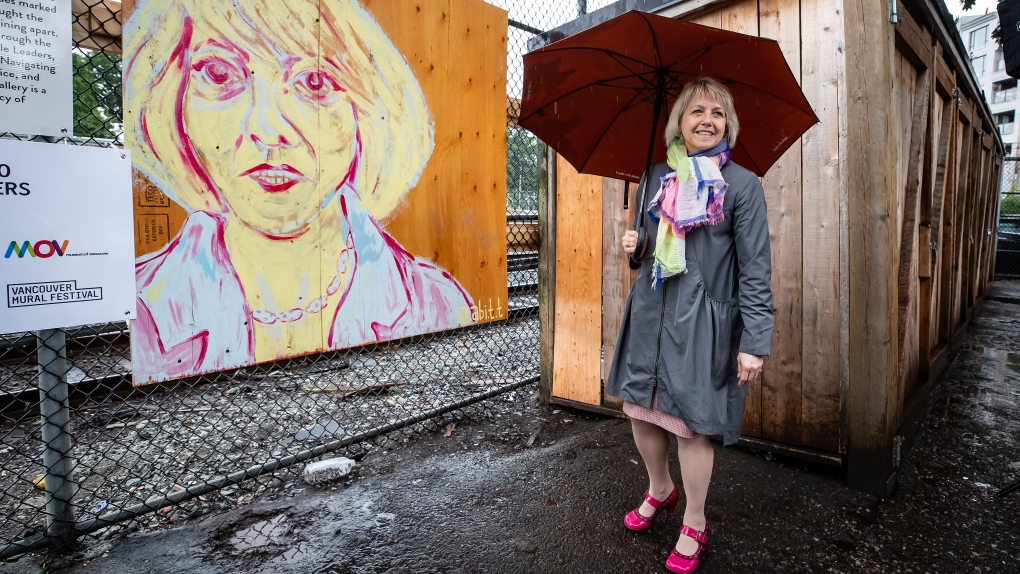 British Columbia provincial health officer Dr. Bonnie Henry wears a pair John Fluevog shoes designed in her honour, as she views her image at the Murals of Gratitude exhibition in Vancouver, on Friday, July 3, 2020. The business improvement association in Vancouver's Gastown neighbourhood honoured Dr. Henry on Friday with a sneak peek at a mural exhibition featuring her image. THE CANADIAN PRESS/Darryl Dyck

The university will be presenting Henry with an honorary Doctor of Laws degree during its virtual fall convocation ceremony on Nov. 6.

“Dr. Henry’s tireless courage in leading us on this often-challenging journey, for the good of each of us and our greater community, is inspiring to us all,” said Royal Roads president Phillip Steenkamp in a release Friday.

“Her leadership, built on decades of experience and rooted in compassion, has positively affected countless lives and helped direct the very path our province is now on,” he said.

According to Royal Roads, recipients of honorary degrees are chosen for their outstanding contributions to their field and for representing values that the university community would like to uphold and inspire in its graduates.

Henry is expected to give a convocation address at the Nov. 6 ceremony and will also speak at the Royal Roads Changemakers event next year as a featured speaker in the seminar series.

“The power of community; supporting each other through adversity, working together with a common purpose, and inspiring to do and be better: this is what has given us the resilience to see this pandemic through,” said Henry in the same release.

“This same sense of community is reflected in Royal Roads University and its graduates, and I am humbled to receive this honour,” she said.

B.C.’s top doctor has received many tributes during her time leading the province’s management of the COVID-19 pandemic.

Henry has had shoes and shirts made bearing her name and likeness, has received musical compositions and even had an octopus named after her at a Vancouver Island aquarium.