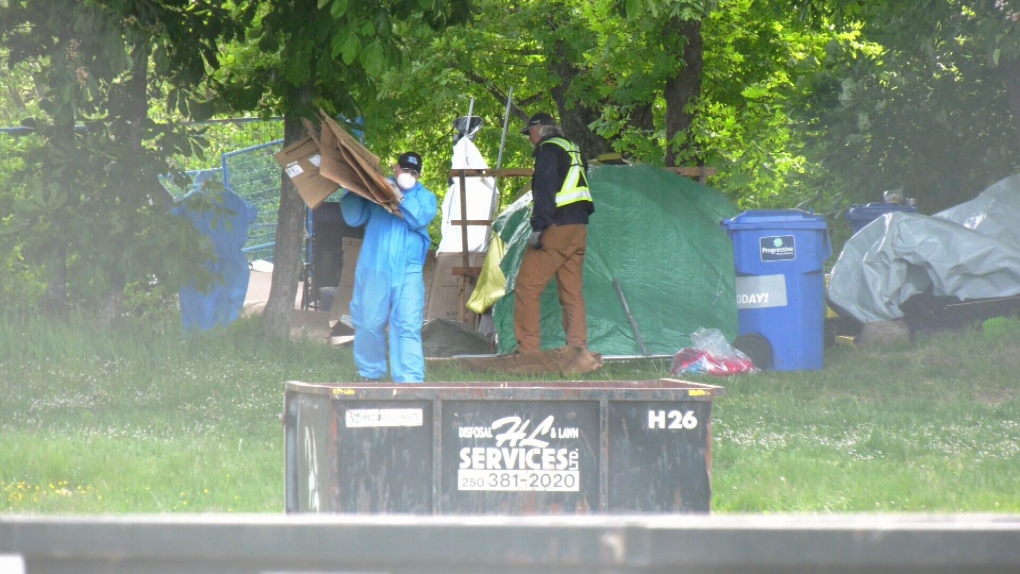 Workers clean up Topaz Park in Victoria, where hundreds have taken shelter during the coronavirus pandemic. (CTV News)

VICTORIA -- Now that the homeless encampments in Victoria’s Topaz Park and Pandora Avenue have nearly been dismantled, the focus going forward will be on cleaning up the grounds.

BC Housing says it has an agreement with the City of Victoria to restore Topaz Park and clean up any contamination left behind.

The City of Victoria says once BC Housing has completed moving people out of the Topaz Park site, the city will secure the area and determine what the province needs to do to remediate the site.

Meanwhile, the city will be responsible for the cleanup and remediation of Pandora Avenue. No timeline has been set for that to begin.

As for the ever-growing encampments in Beacon Hill Park, the city has been allowing full-time shelters in the park. That is something that has the Friends of Beacon Hill Park community group concerned. They say they saw this coming when the city closed the road to vehicle traffic.

"We were very suspicious," said group chair Roy Fletcher. "I think they really want to have the park under-populated so they can have tents scattered all throughout the park. That's my feeling that that was what the mayor’s intention was."

He went on to say he is also very concerned about where the campers have been setting up their tents. Generally they are off the beaten path and in forested areas. Those areas are where most of the highly sensitive, native plants grow.

The big question now is whether those campers in the Beacon Hill Park be moved into hotel rooms.

BC Housing says anyone who is homeless and looking for a place to stay indoors, including those in Beacon Hill Park, is encouraged to connect with an outreach worker or reach out to BC Housing.