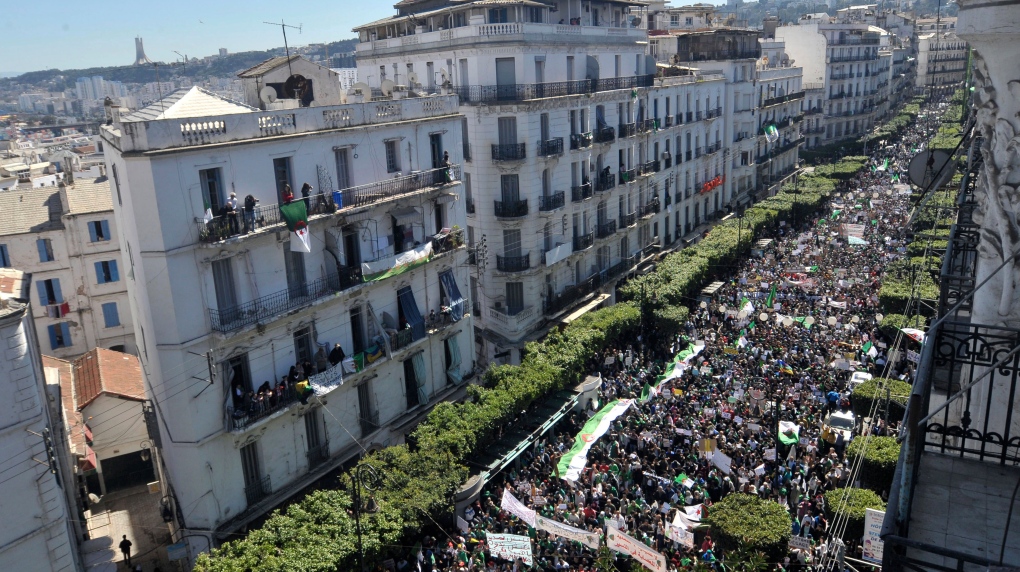 Algerians march during a protest in Algiers, Algeria, Friday, March 15, 2019. Tens of thousands of people gathered Friday in Algeria's capital and other cities amid heavy security for what could be decisive protests against longtime leader Abdelaziz Bouteflika. (AP Photo/Sidali Djarboub)

In the weeks before Canada formally signed a United Nations treaty banning the sale of military weapons to human rights abusing countries, the federal government approved the sale of at least $12 million in Canadian-made military arms and ammunition to Algeria.

Approximately $3.3 million in conventional Canadian-made guns and ammunition were sent to the autocratic African nation in June, and another $8.6 million in July, according to the latest data available from Statistics Canada.

The data set, however, only includes the domestic export of military weapons and not the sale of vehicles, imaging and training equipment, nor the re-export of arms originating outside of Canada — categories which together make up the bulk of all Canadian arms sales annually.

By comparison, Canada sold just over $334,000 in total military equipment to Algeria in 2018, according to the most recent big-picture data available from Global Affairs Canada.

But the 2019 Statistics Canada data show that during the eight weeks of June and July, Canada sent more “parts and accessories of military arms and ammunition” to Algeria than in the previous 10 years combined. Seventeen times more, in fact, making Algeria the leading buyer in the category in 2019.

The timing of the July shipments came less than two months before Canada signed the United Nations Arms Trade Treaty on Sept. 17, a treaty which might have compelled Canada’s Foreign Affairs minister to intervene to stop the sales on humanitarian grounds, according to experts.

Kelsey Gallagher, a researcher at arms trade monitoring group Project Ploughshares, called the sharp rise in weapons exports to Algeria “troubling considering the ongoing threats to civil liberties and human rights in the country, and the possibility that these weapons may play a factor in exacerbating those threats.”

‘We see a gap between rhetoric and reality’

Spokespeople for Global Affairs Canada declined to comment on the nature of the arms sales to Algeria, including the types of weapons sold, the manufacturers involved, the dates of delivery and the intended recipients of the weapons, citing “commercial confidentiality” as their reasons.

One official, however, highlighted how Canada’s recent signing of the U.N. Arms Trade Treaty signalled a new commitment to “firm action to strengthen export controls.”

“This means that there is now a new legal requirement that the Canadian government must deny export permits if there is a substantial risk that the export would result in a serious violation of human rights, including serious acts of gender-based violence,” wrote Global Affairs spokesperson Guillaume Bérubé in an email to CTV News.

Global Affairs did not respond when asked whether similar weapons sales to Algeria would be discontinued under the new U.N. treaty requirements.

“There is such a thing as ‘commercial confidentiality’ but this notion is overused by the Canadian government to shield the public from information regarding who it sells it weapons to,” said Project Ploughshares executive director Cesar Jaramillo.

“We see a gap between rhetoric and reality, and the Canadian government seems particularly interested in highlighting how strong the legislation might be on paper, and that’s a valuable thing, but the credibility of the whole export regime in Canada is suffering.”

Jaramillo said the case is indicative of the risks — both political and humanitarian — involved in Canada’s arms trade, risks which have been underscored by the high-profile sale of Canadian light armoured vehicles to Saudi Arabia.

“On the one hand you have the lofty wording and the strong regulations on paper but on the other you have the demonstrable, observable reality of actual arms shipments that are going to shady customers that have a clear and present risk of being misused,” Jaramillo said.

“The problem is that the risk assessment typically happens before the goods are exported, whereas the conclusive evidence assessment happens when you have the killed civilian or the maimed civilian, and presumably the leverage from exporting has decreased because the goods are already there.”