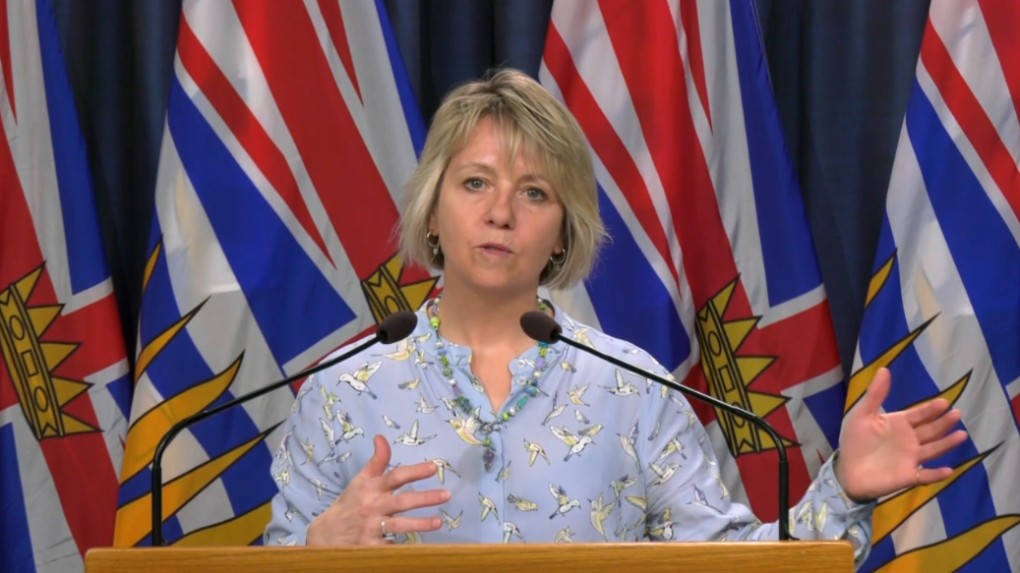 VICTORIA -- Health officials in British Columbia announced Friday that four more people in the province have died as a result of the novel coronavirus.

Officials also announced 53 new confirmed cases of the virus, bringing the provincial total to 1,174 people who have tested positive. There have now been 35 deaths from the virus in B.C.

They also announced an additional outbreak at a long-term care facility, bringing the total to 22 such places where someone has tested positive for the virus.

Henry said there are 176 cases of COVID-19 associated with seniors' care homes and similar facilities across British Columbia. Most of those cases are related to just two outbreaks, Henry said. Those are the outbreaks at Lynn Valley Care Centre in North Vancouver - which was the first one recorded in the province - and at Haro Park in Vancouver.

The provincial health officer said the experience of dealing with those outbreaks has helped lessen the effects of subsequent ones. The province has been aggressively testing people associated with long-term care facilities in hopes of uncovering new outbreaks as early as possible, Henry said.

"We are heartened by the fact that the recent ones have been identified with a single staff person or a single resident testing positive for the disease," she said. "The measures that we’ve been putting in place in long-term care and assisted living mean that these are being identified very early and we are able to control them."

That said, the outbreaks at Lynn Valley and Haro Park have been responsible for most of the deaths seen in B.C. from COVID-19. Henry said Friday that 24 of the 35 deaths recorded in the province have happened at long-term care facilities.

Asked whether B.C. had a projected death toll for the pandemic that she would be sharing publicly, as officials in Ontario and the United States have done, Henry was emphatic that she does not.

She said modelling of the pandemic shows what could happen in a variety of different scenarios, but there are too many unknowns to make predictions about what will occur.

Models exist to help officials ensure the province's health-care resources are prepared to respond no matter what happens, Henry said.

"You can't predict where this is going to erupt," she said. "We all have our own pandemic that we're moving through, and even in different parts of B.C. it's quite different. So, in the Lower Mainland, we know that the outbreak has been driven by, unfortunately, this virus getting into long-term care."

A total of 146 people are in hospital with COVID-19 in B.C., a number that represents a slight decrease from Thursday's update, Henry said. Some 64 people are in intensive care with the virus.

On Thursday, officials said there were 149 people in hospital with the virus and 68 in intensive care.

While that decline is encouraging, both Henry and Dix stressed that British Columbians must stay home as much as possible and maintain physical distance of at least two metres from others when in public.

"You can tell by the numbers that we have, the people who are in hospital and the fact that this disease is being seen across our province, that the risk remains high for everyone here in British Columbia," Henry said. "We are in the middle of it. We are in the thick of things right now."

As she has in the past, Henry reiterated the importance of hand-washing, self-isolation for those who are ill or who have returned from travel and avoiding contact with people who are particularly at risk if they catch the virus.

"This is our time to hold the line," she said. "We must be unwavering in our commitment to keep our firewall up here in B.C., to keep it strong and to flatten our curve."

Most of B.C.'s cases continue to be located in the Lower Mainland. There are 541 people who have tested positive for the coronavirus in the Vancouver Coastal Health region and 412 in the Fraser Health region, which combine to cover all of Metro Vancouver, the Fraser Valley and the Sea-to-Sky Corridor.

Elsewhere in the province, there are 126 cases in the Interior Health region, 74 in the Island Health region and 21 in Northern Health.

A total of 641 people who have tested positive for COVID-19 in B.C. are now considered fully recovered.