VICTORIA -- Many frontline workers in B.C. are still waiting for their turn to be vaccinated, and that includes first responders.

"Our members are a little frustrated with not being vaccinated at this point," said Matt Waterman with the Victoria City Police Union.

The province originally targeted first responders with the AstraZeneca vaccine, but then widespread rollout of that vaccine was put on hold due to fears of blood clots. Once Health Canada decided it was OK to administer the brand again, British Columbia opened up that vaccine for people aged 55 and older. The vaccine rollout then expanded to people aged 40 older, bypassing first responders.

With new and more contagious variants of COVID-19 circulating in B.C., the Victoria City Police Union says the time is now for their members to be vaccinated.

"The contagious part, I think, is one of our concerns because we are in a lot of people's homes and a lot of businesses," said Waterman.

Langford Fire Rescue is a composite fire department, meaning it has 17 paid members and 47 volunteer members. On Friday, Health Canada announced that it believes the AstraZeneca vaccine is safe to use for people aged 30 and older.

Many volunteers at Langford Fire Rescue, however, are in their 20’s.

"Most members aren’t going to qualify for the AstraZeneca (vaccine)," said fire chief Chris Aubrey with Langford Fire Rescue. "Which then makes it that much more important for us to be included and prioritized as part of a mass vaccination campaign in the province."

Meanwhile, the union representing BC Ferry workers wants its members to be put on the province's list of essential workers to be vaccinated. Currently it is not.

"It’s just a real shame to see that somehow the province has seen fit to neglect ferry workers from vaccine priority, when we’re deemed so essential for everything else," said Graeme Johnston, provincial president of the BC Ferry and Marine Workers Union.

The union cites an example from last October, when between 30 to 50 anti-maskers were onboard a sailing heading from Nanaimo to Vancouver for a freedom rally. 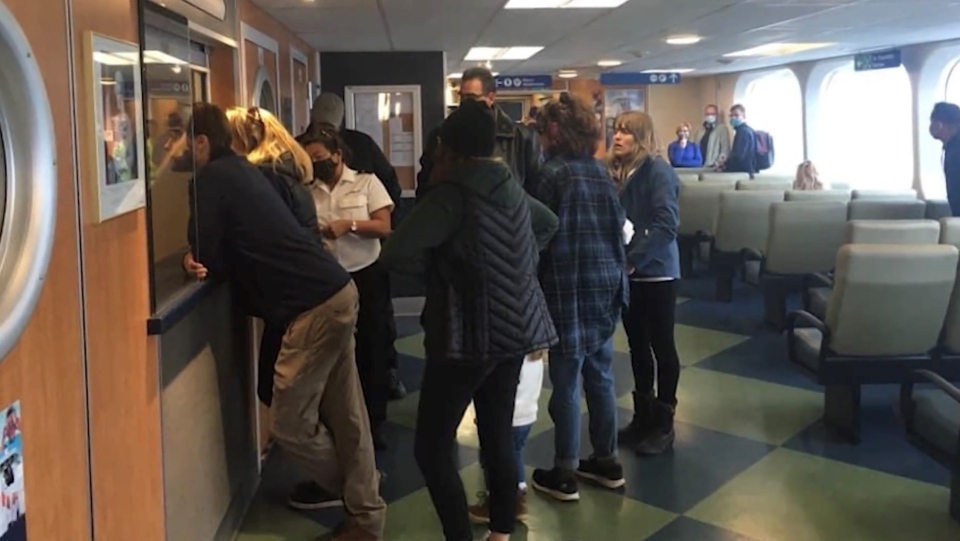 A group of anti-maskers aboard a BC Ferries sailing between Nanaimo and Vancouver in October 2020 are shown: (Submitted)

"You know these folks are a lot like a dirty penny, you don’t know where they’ve been," said Johnston. "Our workers are being asked to deal with them, while we keep our essential services running."

Back at the Victoria Police Department headquarters, the police union says their call for vaccine prioritization is getting pushback from Island Health’s chief medical officer, Dr. Richard Stanwick.

CTV News requested an on-camera interview with Island Health Friday, but it declined. Instead, it issued a statement saying that first responders were the first priority in the workplace vaccination program.

As of Friday, 1.5-million doses of the vaccine had been administered in the province.

Women have a higher chance of developing long COVID than men, study finds