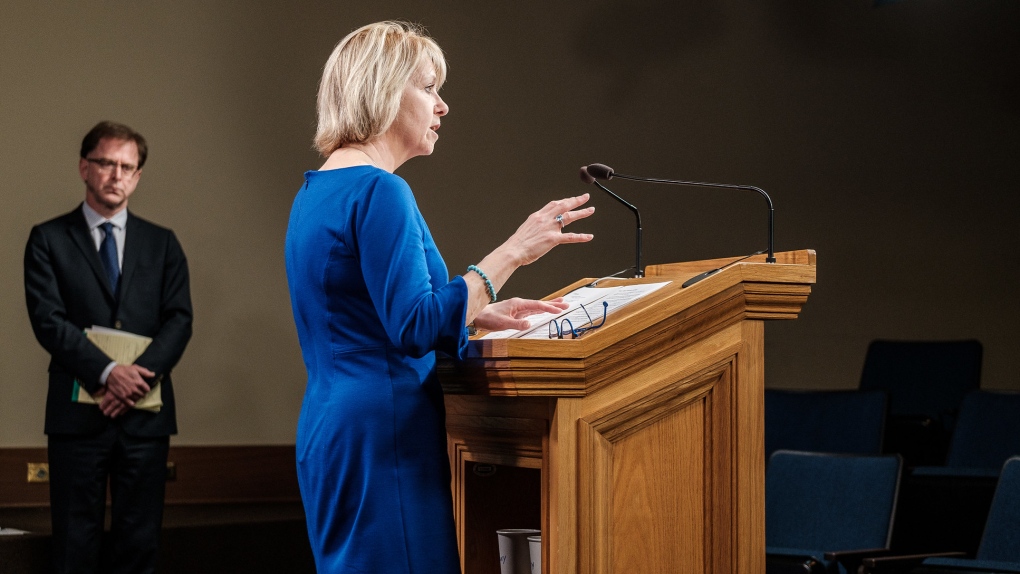 Dr. Bonnie Henry gives an update on novel coronavirus in B.C. on April 20, 2020. (Province of BC/Flickr)

In total, nine of the new cases were discovered on Saturday, and 14 were recorded between Sunday and Monday.

According to Dr. Henry, 1,719 people have recovered from COVID-19 in B.C., meaning there are 504 active cases in the province right now. Of those cases, 66 people were in hospital for treatment, 18 of which required critical care.

As the province looks towards reopening its economy and easing health guidelines next week, Dr. Henry said that everyone should be allowed to engage with the community at their own pace.

“I think it is important for all of us not to feel rushed,” she said.

Henry added that she has heard from many businesses that are eager to reopen, while others told her that they were unsure if they were going to open their doors in the near future due to safety concerns.

“Do what’s right for your business to protect yourself, your employees, and your [community],” she said.

“A steady stream is much better than a rushing river that can damage things in its tides.”

In total, 291 patients in these facilities have tested positive for COVID-19 across the province, alongside 184 staff members.

At the same time, health officials say that no new community outbreaks were seen in the past 48 hours.

In the Kelowna area, a coronavirus outbreak that started among temporary foreign workers has now been declared over.

With Canada’s U.S. border lockdown coming to a close on May 21, health officials say it's incumbent on the prime minister to extend the travel ban.

“Absolutely, we have concerns about reopening the borders,” said Henry. “Broad reopening of the borders is not in our best interest.”

Canada-U.S. border restrictions first took effect on March 21 and have been extended twice by 30 days.

When health officials were asked if they were concerned about gatherings cropping up at beaches and parks as weather improves, the pair said they expect that most people will continue to abide by provincial health guidelines.

“The vast majority of people are doing the right thing," said Henry.

“We are not taking a punitive approach in this province, and that has worked for us.”

The majority of COVID-19 cases in B.C. are located in the Lower Mainland. As of Monday, there are 873 confirmed cases in the Vancouver Coastal Health region and 1,118 in the Fraser Health Region.

Elsewhere in the province, Island Health has reported 125 cases, Interior Health has recorded 180 and Northern Health has confirmed 57 cases of the novel coronavirus.

PM Trudeau: One jurisdiction's misstep could see COVID-19 efforts 'go up in smoke'

What life is like in Nunavut, the only coronavirus-free place in Canada

Business is booming for these companies during the COVID-19 pandemic

Pattie Lovett-Reid: Is it time to invest in the markets during the coronavirus pandemic?

'Please respect distancing': Paris pedestrian sends a message on the back of her hat