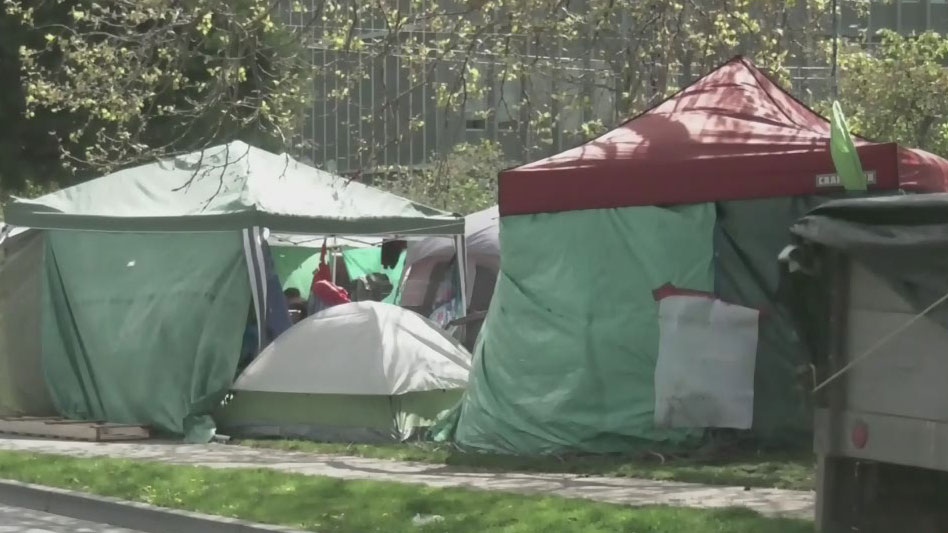 The memorandum stipulates that the city will take the lead role in dismantling the homeless camps that have grown as the COVID-19 pandemic forced the closure of community shelters. (CTV News)

VICTORIA -- The City of Victoria has signed a formal agreement with the province to end homeless encampments in Victoria parks and greenspaces by the end of next month.

The memorandum of understanding announced Monday also aims to prevent encampments from cropping up in the future, according to a joint statement from the city and province.

The memorandum stipulates that the city will take the lead role in dismantling the homeless camps that have grown as the COVID-19 pandemic forced the closure of community shelters. The city will install fencing and task bylaw officers with preventing homeless people from moving back into parks for shelter once they are removed after the April 30 deadline.

“When shelters had to close beds due to the pandemic, people were forced to seek shelter wherever they could find it, including our parks,” said Victoria Mayor Lisa Helps in the statement.

“We’re grateful for the province’s leadership, for the tremendous investments we’ve been seeing in housing for our region, and we are committed to doing all we can to support efforts to house people who are vulnerable," Helps added. "We know this is good for the entire community.”

The city and the province had initially set March 31 as the deadline to move all those who are sheltering in parks into indoor accommodations. The province and the city moved their target earlier this month to allow more time to prepare indoor shelter sites.

“We’ve gotten to the beginning of the end of this crisis by working constructively with Victoria on really difficult issues,” said David Eby, Attorney General and Minister Responsible for Housing, in the statement Monday.

“After we reach our shared goal of getting those living in parks and ravines inside, that intergovernmental work and co-operation cannot stop," Eby added. "If this agreement helps us keep momentum, we will succeed not just in preventing encampments, but in housing vulnerable people with dignity on an ongoing basis.”

The memorandum says the city will also work with the Capital Regional District to make more land and buildings available for housing and shelter space.