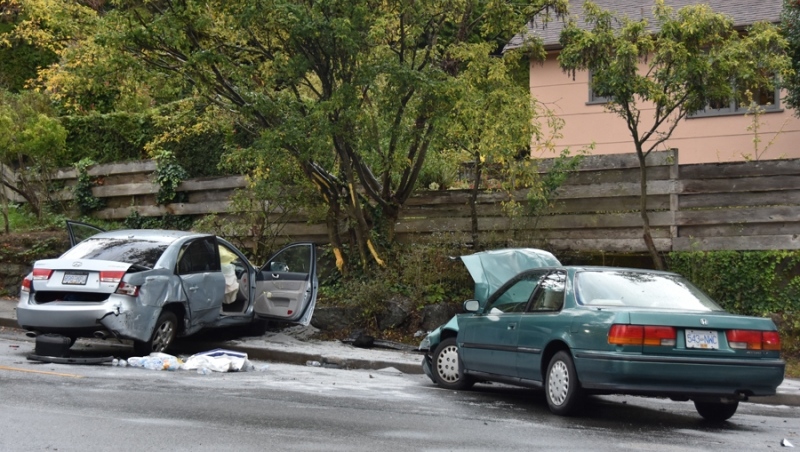 The vehicles involved in the collision are described as a grey 2008 Hyundai Sonata and a green 1993 Honda Accord. (VicPD)

Victoria police are seeking witnesses to a suspected impaired driving crash that sent one man to hospital.

Traffic officers came upon the scene of a two-car crash at Gonzales Avenue and Foul Bay Road at 4 p.m. Tuesday.

They found an injured man being treated by an off-duty doctor.

Paramedics arrived and began to treat the man, noticing signs that he was potentially overdosing on opioids, according to police.

"He was unconscious and in potentially life-threatening condition," Victoria police said in a news release Wednesday.

Medics administered naloxone to the man and he regained consciousness and was taken to hospital.

Traffic was stopped in the area for several hours while police investigated.

Police say no charges have been laid but an investigation continues into whether one of the vehicles involved in the crash was speeding.

The vehicles involved in the collision are described as a grey 2008 Hyundai Sonata and a green 1993 Honda Accord.

Anyone who was in the Fairfield neighbourhood around 4 p.m. and noticed one of these cars being driven erratically is asked to call VicPD at 250-995-7654 or Greater Victoria Crime Stoppers at 1-800-222-8477.