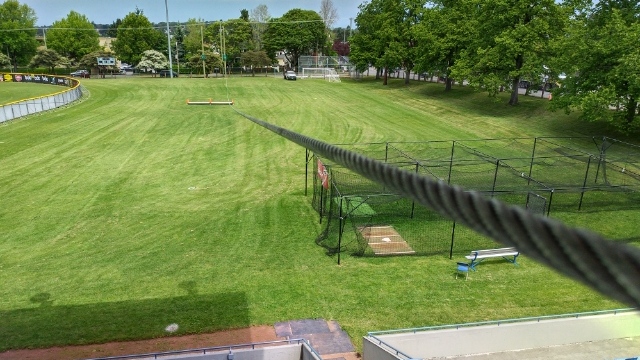 The zipline will run alongside Cook Street beyond the right-field fence, toward Pembroke Street. (CTV Vancouver Island)

The best seat in Victoria’s premiere ballpark might just be flying through the air while dangling from a wire.

Just days before the start of the Victoria HarbourCats' 2019 season, the team is revealing its newest attraction at Wilson’s Group Stadium at Royal Athletic Park: a 120-metre zipline spanning almost an entire city block.

The zipline is the latest in a series of quirky, head-turning promotions from the organization, all geared toward getting fans in through the gates.

Called the “Wildplay Zipline presented by Telus Wireline," the high-dangling wire will allow fans to fly through the sky beyond the outfield from the top of the southeast grandstand, across the eastern portion of the park.

The zipline will run alongside Cook Street beyond the right-field fence, toward Pembroke Street.

The team believes the attraction is the first game-time-operating zipline of its kind in a baseball park.

"A lot of work and co-ordination, spanning more than a year, has gone into this,” said Jim Swanson, general manager of the HarbourCats.

The zipline is scheduled to run during every HarbourCats home game. Tickets to ride can be purchased in advance through the team’s office or website for $12.50 or at the park for $15.

The team says there will be 200 tickets available for each game.

The attraction opens June 1 when the HarbourCats hold their first Peninsula Co-op Alumni Classic at 6:35pm.

The ballpark also features a classic double-decker bus parked in the stadium’s concourse called “the Wilson’s Group Upper Deck Experience.” Fans can take in a ballgame from the makeshift patio that was once a sightseeing tour bus in downtown Victoria.

The Victoria HarbourCats are entering their seventh season in the West Coast League. The team’s first regular-season home game in the 2019 season is June 2 at 1 pm.