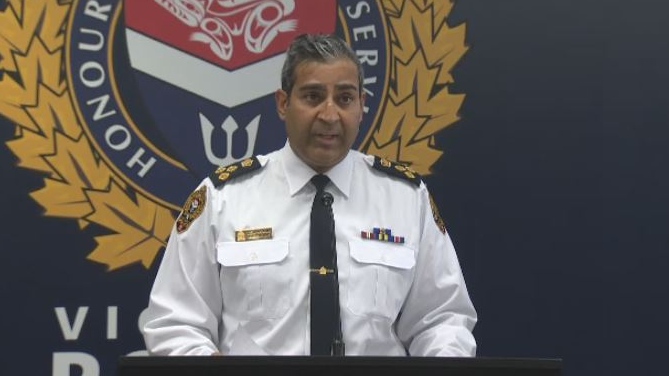 Victoria police say they're reassigning six specialized officers to frontline duty, including the only school liaison constables in Victoria and Esquimalt, after their request to hire more officers was turned down by Esquimalt council.

In all, three school liaison officers, one analysist and intelligence constable, one reserve program constable and one community services division beat constable will leave their current roles by the end of June.

Police Chief Del Manak made the announcement at a news conference held Wednesday, saying the department was forced to redeploy the positions because demand on frontline officers is too great.

“My preference is to not reallocate any positions and to continue providing the full range of policing services that our citizens expect,” Manak said. “However, the demands placed on our frontline officers require us to take action now. Citizens expect that when they call 911, an officer will arrive to help them within a short period of time. Without this change, we cannot maintain that basic level of service.”

The decision effectively wipes out the school liaison program, reduces the force's analysis and intelligence capacity by one half and restructures the reserve constable program.

Victoria police has not received an increase in police officers for eight years. In its most recent budget, it requested funding for six officers from Victoria and Esquimalt, which share police services under a framework agreement established in 2014.

While the City of Victoria agreed to chip in for the additional officers, the Township of Esquimalt did not, voting down the request in a 4-3 decision in March.

The conflict prompted the B.C. government to step in under the B.C. Police Act to have the final say on whether or not Esquimalt had to fund the request.

Township of Esquimalt Mayor Barb Desjardins said Wednesday she was "extremely disappointed" by the decision to cut school liaison officers, adding that it came as a shock to city officials, educators and parents.

"Up until 3 p.m. today it was a rumour. Now it's a reality," she told CTV News. "These are decisions being made in the middle of a process for a resolution of the dispute around the budget, so why proceed now? Why not get that decision made?"

Desjardins said that Esquimalt council voted down the police funding request because numbers showed that crime rates and calls for service had actually declined in the city.

"We have great policing in Esquimalt. Our crime is going down, our calls are going down, all of the statistics that police provide us on a quarterly basis show that our crime is down," she said. "So that's why we said, you're doing a great job now, why would we hire anyone else?"

In its last quarterly report to council, police logged 1,169 calls for service in the fourth quarter of 2018, slightly down from 1,184 calls for the same period the year before.

In the news conference, Manak said he hopes the decision doesn't create a tense relationship with Esquimalt officials, but he has to do what's right for his officers.

"I respect the decision made by councils, that is their decision to make. This is the reality of it, is these positions are required, and our officers have to be able to answer 911 calls," he said.

Desjardins said the township now plans on listening to the community to hear what people think about the decision.

"There are a number of options we may have and I hope we can hear from Chief Manak on this and perhaps have that discussion," she said.