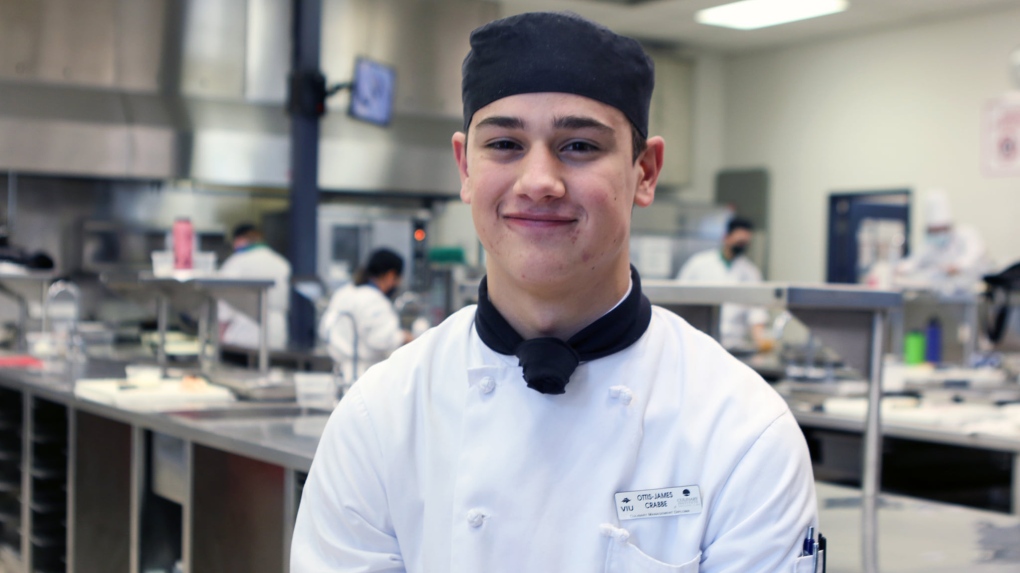 UCLUELET, B.C. -- When Ottis Crabbe's parents opened Abbondanza in 2014, the pizzeria became like the family's home-away-from-home.

To this day, Crabbe's father, Cory, jokes that he only returns to his house in Ucluelet to sleep at night.

Crabbe got his start working at the Italian eatery by running the cash register, before transitioning to manning the wood-fire in a bid to help his father on a busy night.

Yet Crabbe took to it like a natural and as he stood there, illuminated by the warm glow of the fire, his dreams of becoming a chef started to take flight.

“It's just so real,” he said. “It's one of those things that no matter how much time and effort you put into it, you can never achieve perfection - yet, you can strive for it and that's almost poetic.”

Following in his father's footsteps, Crabbe is now studying culinary management at Vancouver Island University (VIU), where he earned a spot on the Junior Culinary Team Canada earlier this month.

Along with eight others, Crabbe is set to compete at the Culinary Olympics in Germany in 2024.

One of the oldest, largest and most diverse international culinary arts competitions in the world, the Culinary Olympics hosted around 1,800 participants from 67 nations last February.

Over the next three and a half years, training for the competition will be “extremely intense,” said John Carlo Felicella, manager of the Canadian youth team.

COVID-19 restrictions have set the team back by at least six months, but Felicella feels confident that if the team works together, they can go after what they want, “and that's first place,” he said.

The intensive training in discipline and technique will extend into Crabbe's professional life by fostering a maturity that will springboard his career, said Felicella.

Upon hearing the news, Crabbe's stomach was flooded with butterflies as he realized what was at stake.

“It's time to tighten up the boots and get to work,” said the Tla-o-qui-aht man.

Taking after his father's ethos on cooking, Crabbe emphasized the importance in “unity” - of putting on your apron and “knowing that you're part of something bigger than yourself.”

“You're not just cooking for yourself,” he said. “You're cooking for everybody that's supporting you.”

Rita Gower, acting chair of the culinary institute of VIU, said that Crabbe not only has “buckets of talent,” but the stamina to go the distance.

“It's a lot of work and Ottis has been nothing except enthusiastic and hard-working,” she said. “He's always willing to take on something extra and in every way has demonstrated that he has the personal attributes to be successful in this competition.”

For Crabbe, Canadian cuisine means keeping it local with fresh proteins. Drawing inspiration from his First Nations roots, the 19-year-old has a deep “respect for ingredients.”

“Canadian food is a melting pot of every culture,” he said. “It's just the ability to express what your mom made on Sundays.”

Like his father, Crabbe uses cooking as a “doorway into society.”

“He fell in love with it like I did,” said Cory. “It's almost impossible for me to describe how proud I am.”

Beyond the culinary olympics, Crabbe dreams of continuing to participate in competitions and train under a Michelin star chef.

While he asserts the importance of gaining exposure to different cultures and food scenes through travel, he hopes to one day return to where it all began.

“After I'm done flexing my culinary muscles, or seeing what my potential is, I'd like to go back home,” he said. “And cook with my family at the restaurant.”