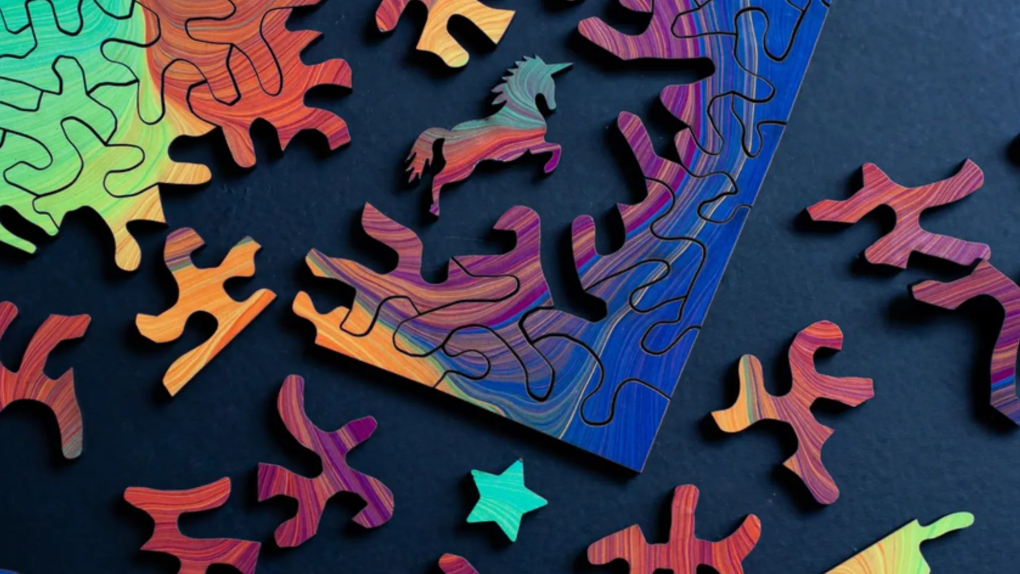 The studio's latest creation is called Puzzle Lab. It uses specialized software and an algorithm that creates mostly random shapes, which fit together into an image like a classic jigsaw puzzle. (Studio Robazzo)

VANCOUVER -- A Vancouver Island company is using technology to reinvent a beloved pastime, just in time for a pandemic holiday season that, lacking in parties, could be full of free time for quiet games.

Tinka Robev and Andrew Azzopardi, Victoria-based inventors who together comprise Studio Rabazzo, say they've created "a different way of puzzling," and it's keeping them busy this December.

The studio's latest creation is called Puzzle Lab. It uses specialized software and an algorithm that creates mostly random shapes, which fit together into an image like a classic jigsaw puzzle.

The pieces not only look different, but feel different.

"There's a weight to them," Azzopardi said.

The algorithm that makes the unusually shaped pieces is based on the growth of coral reefs, according to Robev.

"We're using that sort of natural geometry to create these digitally derived forms," she said.

After the algorithm designs the shapes, a laser cuts out the pieces, including a few special objects that are programmed in amid the seemingly random outlines.

The special pieces, called "whimsies" take shapes that fit with the themes of the images the puzzles depict: A flamingo-shaped piece amid a puzzle depicting a trio of the birds, a unicorn-shaped piece in an abstract rainbow-coloured design.

There are 12 different designs, and orders are coming in quickly. The studio has sold almost 300 of the puzzles so far.

"I feel like it can capture people's imaginations better than playing a game on the phone or being on Facebook all the time," Azzopardi said.

"This was really a way for us to get back into the physical realm, and also encourage other people to do the same," Robev added.

Vancouver Island residents who want to pick up one of the puzzles before Christmas are advised to get their orders in before Dec. 18.

The company is also offering free shipping on North American orders over $100. Puzzles sell for $55 apiece, and the studio plans to introduce new designs in the new year, as well as the option to order custom puzzles.