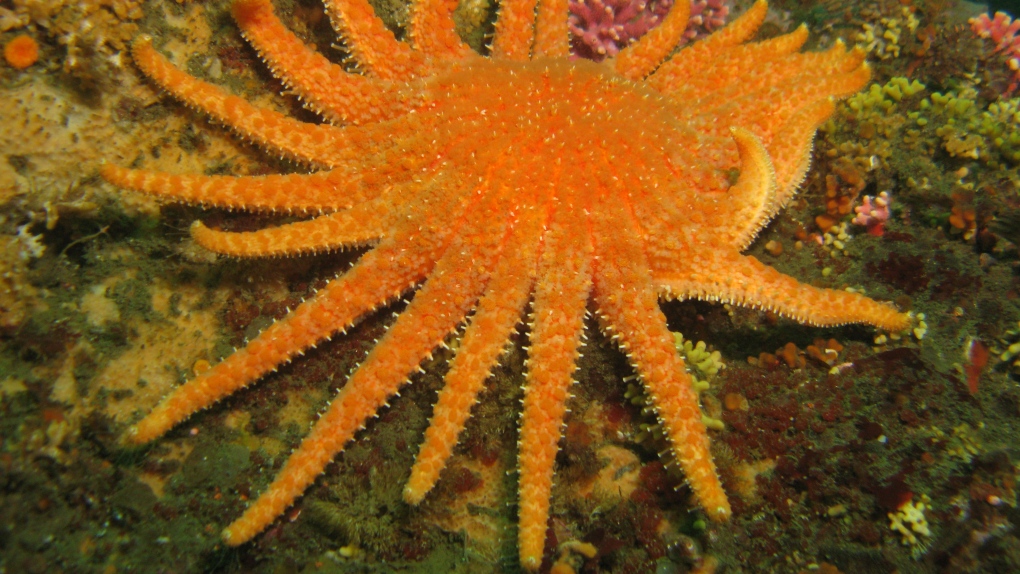 A newly released study says a combination of warm waters and infectious diseases has been determined as the cause of a die-off of populations of sunflower starfish across the Pacific coast. (The Canadian Press/Handout-University of California Davis, Janna Nichols)

At the time, it sounded like a plot twist straight out of a science fiction movie.

A mysterious disease was sweeping through an entire species of sea creatures, causing their bodies to dissolve and turn into gooey blobs before disintegrating, limbs falling off.

But this was not a sci-fi movie. It was the grim reality that impacted 20 sea star species on the West Coast in 2013-14, decimating populations.

Five years later, there is both good and bad news for the future of starfish around the Vancouver Island area.

"It’s a mixed bag," said Alyssa Gehman, a postdoctoral researcher at the Hakai Institute and UBC.

Two of the most impacted sea stars, the ochre and the sunflower stars, will be familiar to Vancouver Islanders.

According to studies done by the Hakai Institute, ochre sea star populations at many sites in the Salish Sea fell by at least 75 per cent as a result of sea star wasting.

However, scientists are starting to see unusually high numbers of juvenile ochre sea stars, leading to hopes they can replenish their populations.

It’s a very different story for the sunflower sea star, which was hit even harder.

The Hakai Institute found a 96 per cent decline in sunflower sea stars around the central B.C. coast and so far, there have been signs of recovery in just one area.

"The heartstring side is where the sunflower sea star is, just a really gorgeous, massive and really powerful sea star. They moved through systems and ate so much of the things in the sub-tidal that all these animals had escape responses from them," said Gehman.

According to a research paper published by the American Association for the Advancement of Science, sunflower stars are an important predator of sea urchins. In some locations where sunflower stars have disappeared along the U.S. west coast, urchin populations have exploded, causing kelp to diminish.

As for the cause of the sea star wasting outbreak, there are theories, but no conclusive answers. Scientists are also still trying to figure out why some species were more impacted than others.

Gehman has been looking into what role climate change may have played in the outbreak and she said there has been fairly strong evidence that temperature is a factor.

"We don’t yet know exactly where in the process but in the lab when we’ve done experiments. If you put six stars into warmer water they die faster, disease spreads faster, if you put them into cooler water that actually slows the disease down," she said.

"The models I use are exactly the same as what you use to study human diseases. By studying how the environment changes the relationship between hosts and their diseases we can actually expand on the literature and the theory to begin to understand how climate change affects disease in general and that can influence diseases in human populations as well," said Gehman.

For Gehman, studying sea star wasting has been both rewarding and disturbing with particular concern for the sunflower stars.

"They are really quite magnificent so to have so many of them die is just a tragedy."