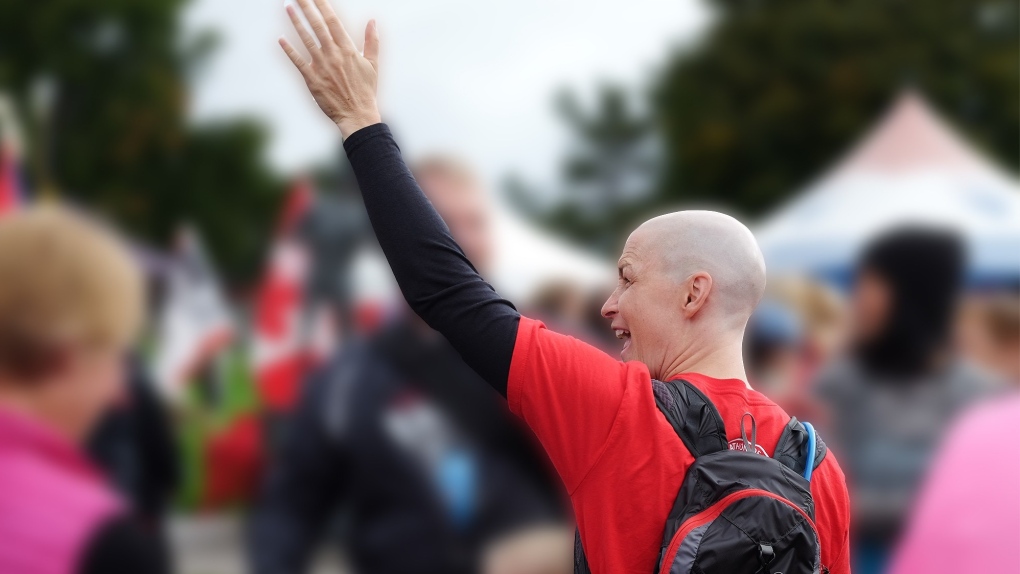 Michelle Twigg, 34, passed away from breast cancer two years ago, but her legacy of supporting the fight against cancer and the Terry Fox run lives on. (Submitted)

A dad and two little girls stopped for a moment to look at the Terry Fox Memorial at Mile Zero in Victoria.

They paused at the roses and photo of a smiling woman placed on the statue.

The words on the statue from Fox “Somewhere the hurting must stop…” might be directed at the family.

The picture was of Michelle Twigg, a wife, a mother, a teacher who passed away two years ago, following a four-year battle with breast cancer. She was just 34 years old when she was diagnosed.

The family pausing at the statue was Michelle’s husband and daughters. Michelle had been a huge Terry Fox fan for her entire life.

“She was a hardcore Terry Foxer. A lot of people think it was sort of a result of her own diagnosis but it pre-dated that. She grew up in Ontario, in the 80s and you know, we had a lot of teachers, community people, who had firsthand experience with Terry Fox, they had been on the run, running alongside Terry,” explained Michelle’s husband Graham Twigg.

That experience inspired a school aged Michelle to become a lifelong advocate for Terry Fox and his dream of a cure for cancer.

“A lot of the things that she liked about Terry were he was not the perfect, flashy hero, he was kind of the embodiment of all the Canadian ideals that we’d like to think that some of us have. The determination, the drive, the selflessness and the humility,” said Twigg.

He added that she tried to emulate those qualities and inspire others to do so too.

“Michelle was one of the strongest people I’ve ever met to this day, even through her treatments,” said Lovisa Macdonald, a family friend.

For her the Terry Fox run is Michelle’s.

“Literally I think of it as the Michelle Twigg run because she was obsessed with Terry Fox,” she explained.

”If you gave her the opportunity to talk, to talk to anybody she would talk about Terry, now we all need to emulate Terry, how we need to raise money for Terry,” said Darren Wark, a relative of Terry Fox and longtime organizer of the Victoria run.

Michelle’s husband now heads up their fundraising team, which is only getting stronger.

“The Twiggs for Terry numbers in the hundreds if not the thousands if you talk about all of the people all across Canada who know about Michelle and her story and her support of Terry Fox, said Twigg.

“A sizable percentage of the folks who were down here at Mile Zero often are here not just in support of Terry, but in support of Michelle,” said Twigg.

The family’s advocacy work keeps going, even now that the run is over.

They are gearing up for events of their own, including a fundraising walk up Mount Douglas to commemorate the start of Terry Fox’s run in April.

But the annual Terry Fox run is the main event for them, on the calendar like Halloween and Christmas.

“My kids are 9 and 11 years old, they were 7 and 9 when Michelle passed away, As much as we have pictures and video and all that stuff of Michelle, having hundreds of people who have firsthand memory of Michelle and are able to convey that to my kids and convey what she meant to them, that really means a lot to us in terms of preserving Michelle’s memory.”