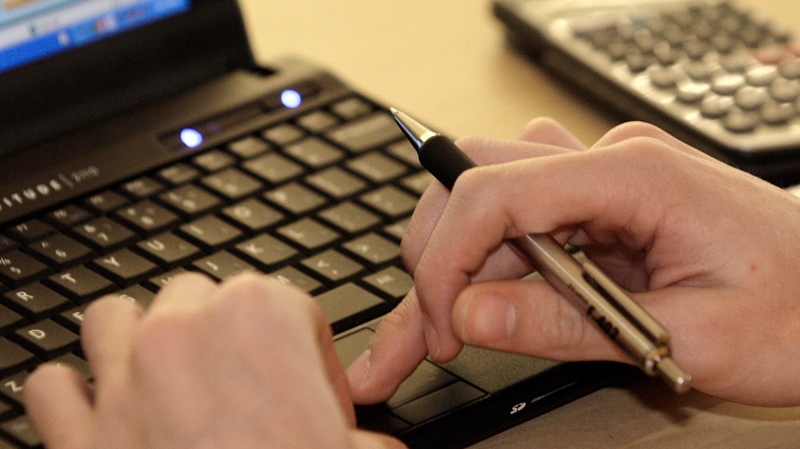 A student works with a computer and a calculator during a pilot math class at Reynoldsburg High School in Reynoldsburg, Ohio, Feb. 1, 2012. (AP / Jay LaPrete)

The family of a Saanich boy who suffered severe migraines they believed were caused by wireless technology has had their discrimination claim dismissed by the BC Human Rights Tribunal.

According to the boy's mother and grandmother, his symptoms – everything from headaches and vomiting to extreme fatigue and even night terrors – were caused by “mandatory exposure to microwave radiation from wireless technology."

They believe the boy suffers from electromagnetic hypersensitivity, known as EHS.

They launched a human rights complaint against the Saanich School District and staff, alleging discrimination “on the basis of T’s physical and mental disabilities.”

That claim has been dismissed by the BC Human Rights Tribunal.

In his written reasons for the dismissal, Walter Rilkoff, a Tribunal Member, explained T’s mother wanted at least 25 per cent of the boy's middle school to be “Wi‐Fi Free.”

However, staff were unable to assure the boy of a wireless environment in the classroom.

Instead, T, who can’t be named to protect his privacy, spent most of his days in a room by himself, as far away from routers as possible.

That attempt to limit his exposure to wireless devises meant he was left isolated from his friends.

The claim described how in September 2015, T, who was then 10 years old was developing migraine headaches at school.

His mother and grandmother determined the cause was spending time with classmates who had cellphones with them.

As time went on, they claimed an increasing number of headaches were caused by teachers using tablets, students using cell phones and even by an audio system used to help students with hearing impairments.

In the complaint, T’s grandmother said he was “really upset, frustrated and angry about being downstairs for five hours a day with no contact with his peers.”

Eventually T was taken out of the school to do distance learning from home.

Rilkoff noted that in its response, the Saanich School District said there was no contravention of the Human Rights Code because T doesn’t suffer from a “scientifically verified mental or physical disability” which would require accommodation.

They used publications from the World Health Organization and Health Canada to support their position.

The BC Centre for Disease Control would not comment on the case, but has done its own review of potential links between radiofrequency and health.

“Ongoing research regarding the potential health effects of RF has not demonstrated clear evidence of impacts on cancer, reproduction, and development," it concluded. "However, at question is whether there are effects of aggregate and ongoing RF exposure on the population’s health.”

In other words, more studies are needed.

The Saanich School District did not respond to requests for an interview.

In his closing comments, Rilkoff called the case “unfortunate.”

He suggested T’s caregivers go to medical professionals to determine the cause of T’s symptoms, pointing out the boy is now a teenager.

“He is now of an age where he should be able to provide his own history and undergo provocation and more probing examinations about the triggers for his symptoms without the filters of his grandmother and mother.”