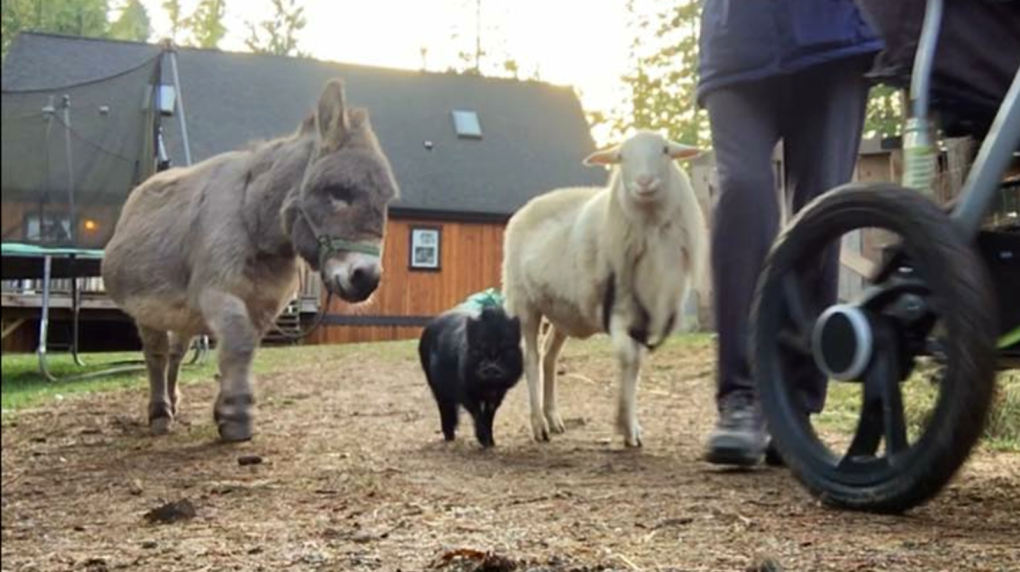 A donkey suffered injuries and a lamb was killed in an apparent cougar attack near Courtenay this week. Conservation officers destroyed three cougars as a result. March 6, 2018. (CTV Vancouver Island)

The province says three cougars were destroyed after killing a lamb and attacking a donkey at a rural Comox Valley property.

The incident took place at a property close to the visitor information centre near the Courtenay-Cumberland interchange over the weekend, according to the Ministry of Environment.

A property owner called RCMP to report the deadly cougar attack, and said the cat was also seen chasing after pigs. Further investigation found that a donkey sustained a minor scratch to its ear, likely from defending other livestock.

The caller shot at the cougar and believe it was struck in its hindquarters, causing the predator to run away.

Mounties arrived at the property to find two cougars thought to be juveniles still on the premises, and killed both of them.

Because neither of the cougars were wounded, RCMP determined there was likely an adult female still at large and potentially wounded from the gunshot.

Conservation officers attended the property with tracking dogs early Sunday morning and spotted the cougar on an access road about 120 metres from the property.

Despite the dogs' barking as they tracked the animal, the cougar stayed on scene and did not run when eventually approached, letting the officer and dogs get as close as 20 metres.

"This behaviour was not normal, and the CO had little doubt this cougar was involved with the livestock conflict last night," the ministry said in a statement.

The officer killed the cougar, which was confirmed to be an adult female, and determined it did not suffer a gunshot wound as previously reported.