Takaya, the lone wolf of Discovery Island, comes to life in driftwood sculpture 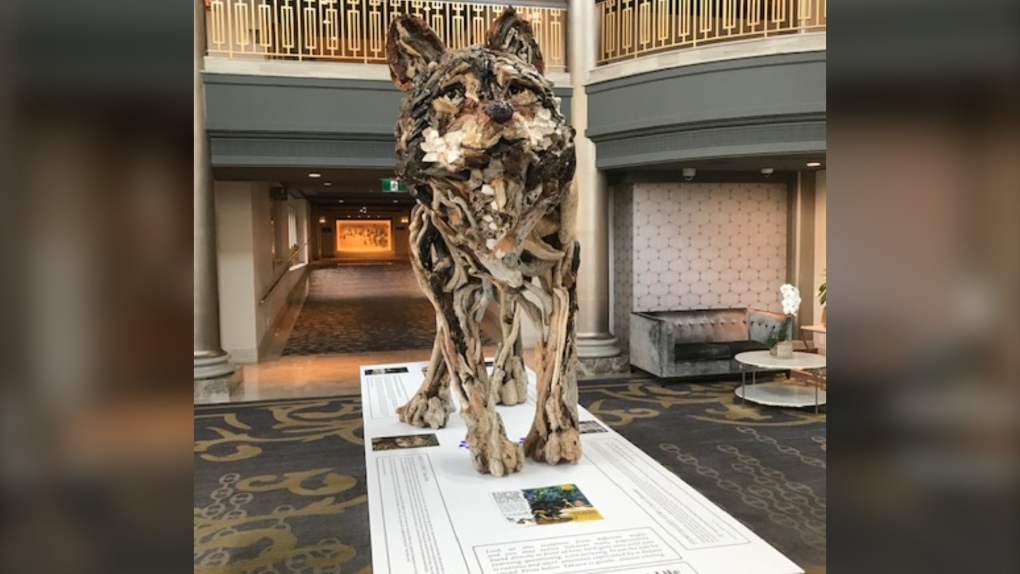 VICTORIA -- On the same day a book was released documenting Takaya, the lone wolf who lived for several years on Discovery Island off Victoria, a driftwood sculpture of the world-renowned animal was placed in the Fairmont Empress Hotel’s main lobby.

The larger-than-life replica of Takaya received a warm welcome and approval from Winston, the hotel’s own four-legged ambassador, as it was wheeled in.

The detailed sculpture has a remarkable resemblance to Takaya and practically comes to life for the viewer, something Bub says she was determined to achieve. She says she became obsessed when creating it.

The project was the brainchild of Cheryl Alexander, author and photographer of the newly released book, “Takaya – Lone Wolf,” which showcases the animal.

Alexander spent more than six years studying, observing and documenting Takaya, determined to learn more about the animal and his solitary life on the small island. She also produced a television documentary last year that propelled the wolf onto the world stage and gave him an international following.

Alexander is overjoyed with how the tribute sculpture came together.

“It’s such an incredible tribute to Takaya, I can’t tell you how emotional I feel looking at it,” she said. “I hope it carries Takaya’s story far and wide.”

In January, for unknown reasons, Takaya left his small island home, where he had lived for nearly 8 years, and swam to shore. He was spotted in Victoria’s James Bay neighbourhood before being tracked down by Conservation officers, tranquilized and relocated somewhere on Vancouver Island.

In March, Takaya was shot by a hunter in the Shawnigan Lake area.

Both Alexander and Bub hope Takaya’s spirt will live on through the sculpture, book and documentary. They also hope to spark conversation and understanding about wolves and change regulations around hunting of the animals.

The driftwood sculpture will be on display at the Fairmont Empress Hotel until mid-October before moving to the Eagle Feather Gallery in Nootka Court for a Takaya-inspired art exhibit.

Masks are required inside the hotel lobby.