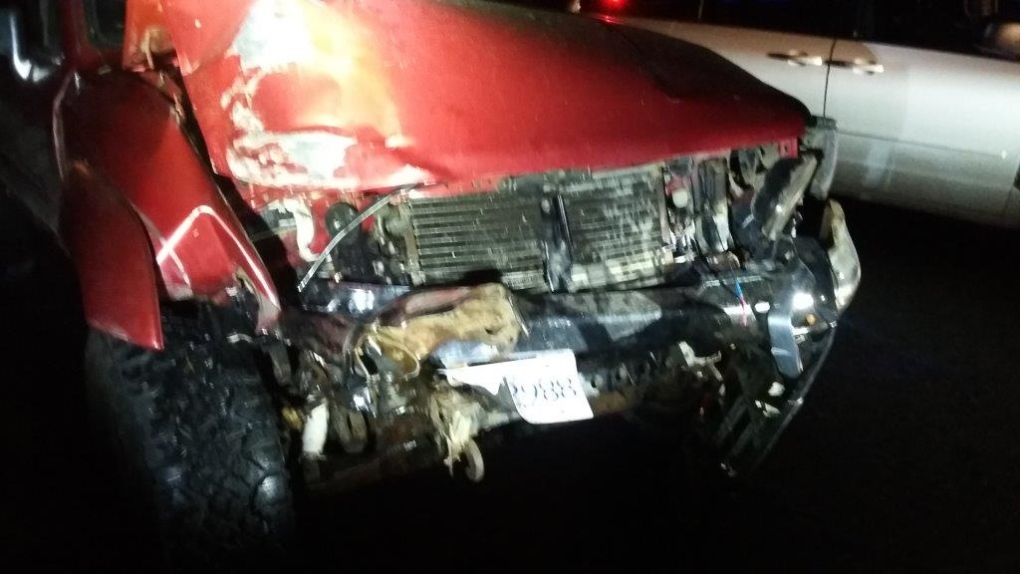 A small Toyota pickup truck was involved in a crash in Oak Bay on Wednesday, May 15, 2019. (Oak Bay Police Department)

A late-night crash in Oak Bay may have been caused by an impaired driver who fled the scene after hitting a sign, a retaining wall and then a hydro pole, causing considerable damage, according to police.

A passenger in a small Toyota pickup involved in the incident, who was also the registered owner, remained at the crash scene. He was issued a ticket for driving with undue care and attention.

The driver, who fled, has not been found but police say they know who it is and want to follow up with them.

While police were doing traffic control and dealing with the crash scene Thursday, officers noticed a car going faster than it should have been and flagged it down.

It became apparent the driver of that car had been drinking and police demanded he take a breathalyzer test. When he refused to do so, an immediate 90-day roadside suspension was issued and his vehicle was impounded for 30 days.

“To think that while attending an impaired driving collision, one of our officers caught an unrelated impaired driver is incredibly disappointing,” said deputy Oak Bay police Chief Ray Bernoties.

There was only one vehicle involved in the collision that happened just north of Cedar Hill Cross Road and Cadboro Bay Road around 11:20pm Wednesday.

There were no reported injuries in the crash but the pickup truck sustained heavy damage.

The hydro pole had to be replaced along with a road sign. Houses in the area were without power for several hours as hydro crews replaced the pole.