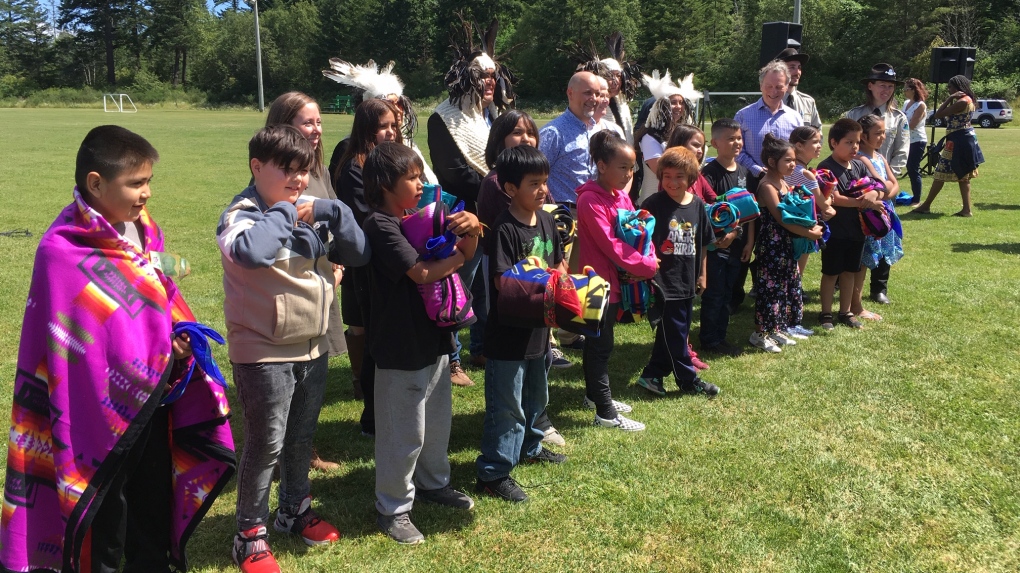 The Tribal School class was honoured with a blanketing ceremony, drumming and songs on Monday, June 3, 2019. (CTV Vancouver Island)

After a field trip to John Dean Provincial Park, there was one very big question on the minds of one Grade 3 class.

The North Saanich mountain is known to local First Nations as a "place of refuge." The students felt a strong connection to the park and wrote a letter requesting the name of the park be changed to include the traditional name of the W̱SÁNEĆ peoples.

Students Jorja Horne and Danaya Sam spoke on behalf of their classmates. "We just wanted to change the name back to ȽÁU,WELṈEW̱," the two said.

On Monday the students of the ȽÁU,WELṈEW̱ Tribal School celebrated the renaming. The Tribal School class was honoured with a blanketing ceremony, drumming and songs.

"The W̱SÁNEĆ people have always known this place as ȽÁU,WELṈEW̱," said Tsartlip First Nation Chief Don Tom. "It is where our ancestors found refuge after the Great Flood and it is where we bring our children today to learn our history."

The park was founded in 1921 and named after Saanich Peninsula settler John Dean. Dean donated the land to the province to protect and preserve the only old growth forest on Southern Vancouver Island.

Maureen Dale of the Friends of John Dean Society says the society fully endorses the naming decision, which recognizes the significance of the mountain to First Nations while retaining the legacy of John Dean's gift of the park.

"I am honoured to celebrate with the students of ȽÁU,WELṈEW̱ Tribal School as the park and mountain they have known all their lives is acknowledged," said Adam Olsen, MLA for Saanich North and the Islands. "By listening to the Indigenous youth in our communities we learn that reconciliation is about acknowledging our past and working together through purposeful acts of kindness and inclusion that benefit us all."

The name change to ȽÁU,WELṈEW̱/John Dean Park received royal assent on May 16 as part of an amendment to the Protected Areas of B.C. Act. New signage that includes both names will be updated by BC Parks during the coming year.

"Only through a common understanding of the true history of this land can the difficult work of reconciliation begin," said Tom.