Snow blanketed parts of Vancouver Island Sunday to kick off what should be a very chilly week.

Courtenay residents woke up Sunday to find a light blanket of snow on the ground, enough to cover roads and trails.

Qualicum Beach got a blast of winter with more than nine centimetres of precipitation.

We are currently at 8cm here in Qualicum Beach. Still snowing quite steadily. I’ve heard rumours of snow later in this week as well, can those be confirmed? @50ShadesofVan @ensembleator @ParksvilleWX pic.twitter.com/Dd0m1Aqy6S

Greater Victoria got only a dusting of snow on rooftops and trees with accumulations between 0.4 and 0.6 millimetres.

But the cold did create some picturesque moments in B.C.'s capital, such as freezing over the fountain at the B.C. Legislature Monday morning. 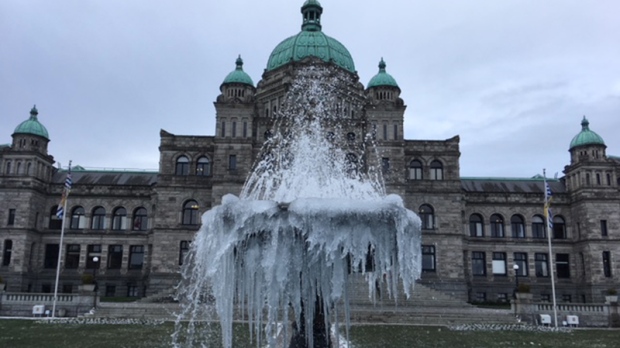 The snow came as a result of a modified arctic air mass over B.C.'s South Coast.

It happened just a week after Victoria residents gleefully shared photos of cherry blossoms in bloom, in sharp contrast to parts of eastern Canada that were hit with a deep freeze.

An Environment Canada said last week that the cold will hover in the region through the week, and more snow could be in store.

With a predicted high of zero degrees, there was a 30 per cent chance of flurries for Victoria on Tuesday.

The cold weather means Victoria and other cities have enacted their Extreme Weather Protocols, opening up shelter beds to homeless people so they don't have to sleep in the elements.

Environment Canada also predicted a chance of flurries in the region Thursday and Friday night.

Digging out this morning from last nights snow storm in #Nanaimo. I might be late be work. @CTVNewsVI pic.twitter.com/L2RuyIpX30