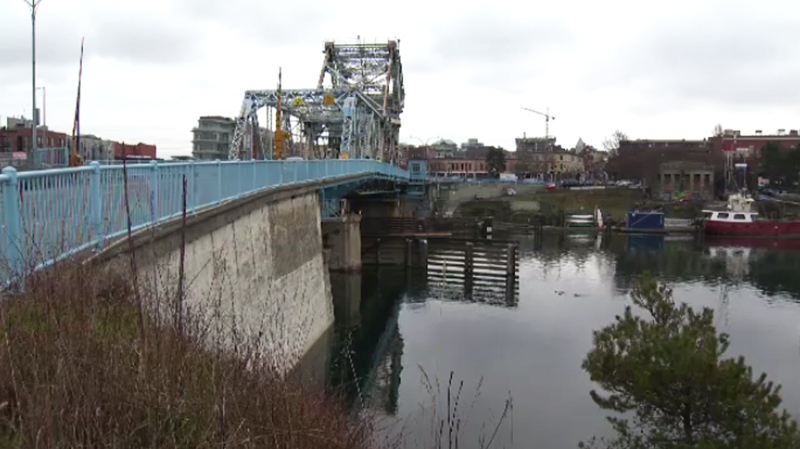 A prominent B.C. marine transport company has taken aim at the new Johnson Street Bridge in a leaked letter to Victoria City Hall.

In a letter addressed to the city’s engineering department, Seaspan Marine says it has “serious concern” that the bridge’s design will force barges to restrict their speed when passing under it, increasing the risk of a possible allision, or crash.

The city has reportedly ordered that tugboats with tows must reduce their speed under the bridge to three-and-a-half knots, but Seaspan says speeds of under five knots are unsafe.

It also says that because the city has chosen to leave abutments of the old blue bridge in place after the new bridge is installed, and that it will effectively double the length of the bridge transits.

“This doubling of the transit distance in combination with the speed limits proposed undermines safety rather than enhances it,” wrote Paul Hilder, Vice-President of Marine Operations for Seaspan.

Hilder closes out the letter by stating that the company would halt service to industrial areas in the upper harbour unless the speed limit is increased, which would have a serious impact on businesses that rely on barge access.

“I am requesting the City reconsider their position to seek a reduced speed limit from Transport Canada and the Victoria Harbour Master,” Hilder said.

Seaspan Marine President Bart Reynolds has since confirmed the authenticity of the letter, saying it was submitted in December.

"We look forward to working with the City of Victoria and Transport Canada to come to a solution that satisfies the needs and safety standards of all parties involved," Reynolds said in a statement.

Victoria’s mayor, city manager, council, and harbour master were copied on the letter.

Jonathan Huggett, the city's project manager for the Johnson Street Bridge, said it has been working with marine stakeholders including Seaspan on the new bridge.

"The City is working with its technical experts to ensure the bridge has an appropriate fendering system and operating procedures, which includes type and configuration of tug boats, speeds and other requirements," Huggett said. "These will be presented to council for approval in the spring. We will continue to work with all parties to ensure the bridge is safe."

The replacement bridge is scheduled to open to traffic in 2017, almost three years behind schedule.

The project's budget is over $105 million.