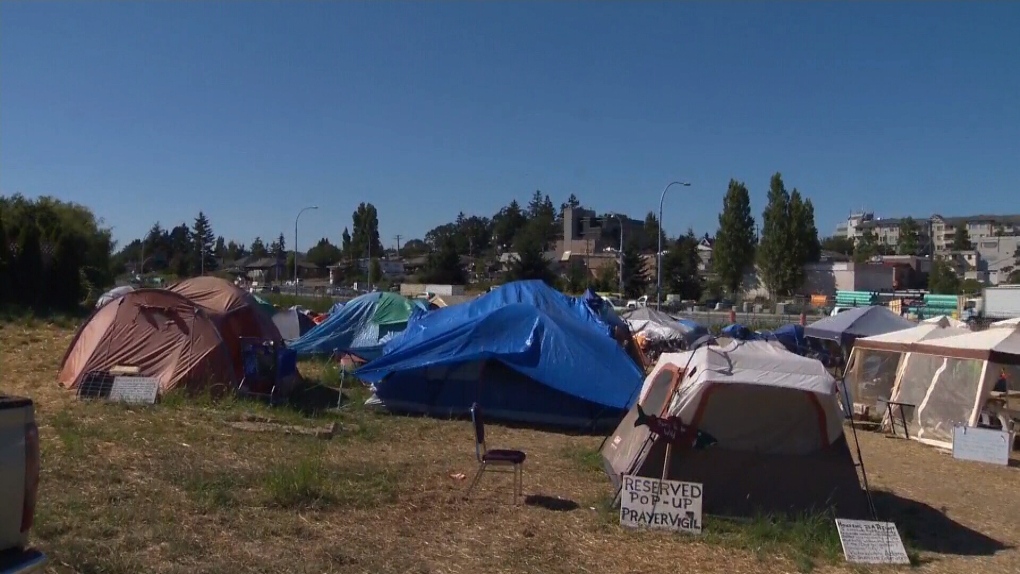 Campers at a tent city in Saanich, dubbed 'Camp Namegas' by residents, have been ordered to cease occupation of the land by the city. July 12, 2018. (CTV Vancouver Island)

The District of Saanich has filed for a court-ordered injunction to remove campers from a growing tent city in Regina Park.

Saanich said it commenced legal proceedings in B.C. Supreme Court on Monday, and the district is seeking to immediately vacate the park due to fire risks and other hazards that need to be addressed.

In a news release, Saanich outlined its reasons why occupation of the park isn't working. Among them, it argues that campers have not addressed ongoing fire hazards and that the encampment "has and continues to negatively impact on the local residential and business community."

It also says the tent city has placed "an enormous burden" on the city's budget due to constant support from police, fire and parks officials.

The injunction hearing has a scheduled court date of Aug. 13.

The city has twice demanded residents leave the park, issuing a notice to vacate on June 8 and a notice to cease occupation on July 12, but those living there have stood their ground.

The issue prompted Saanich to change its own bylaws governing municipal park use. Council amended the city's current bylaw to allow temporary overnight sheltering in parks from 7 p.m. to 9 a.m., but requires those seeking shelter to move on at 9 a.m.

A group representing the 90 or so residents of the tent city, which they've dubbed "Camp Namegans," issued their own statement in response to the injunction filing.

"Homeless people have found home at Camp Namegans. Much like tent cities across the province, Camp Namegans residents stay in the tent city because it is safer than being alone on the streets," the group said. "City bylaws that limit camping to night time hours force homeless people into cycles of daily displacement where they suffer police and bylaw harassment and theft of their belongings, which exacerbates their physical, mental, and emotional stress."

The group ended the statement by saying residents will stand their ground in the face of a possible injunction.

It plans to hold a news conference Wednesday morning.