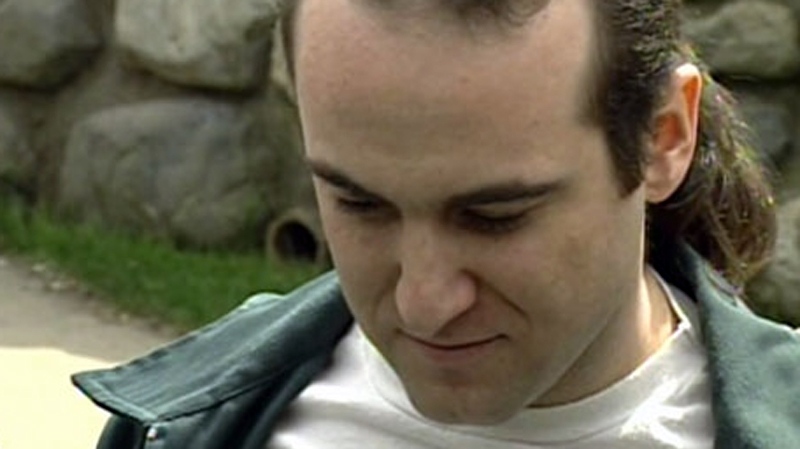 Derik Lord, shown in this file image, is serving a life sentence for the 1990 murders of Sharon Huenemann and Doris Leatherbarrow. (CTV)

A Saanich man convicted of killing his friend’s mother and grandmother in a murder-for-hire scheme has again been denied parole.

Derik Christopher Lord and his schoolmates David Muir and Darren Huenemann were convicted in the first-degree murders of Sharon Huenemann and Doris Leatherbarrow in 1992.

The two women were found bludgeoned and stabbed to death in Tsawwassen in 1990. Lord and Muir were 17 and 16 years old at the time of the murders and were attending Mount Douglas Secondary School.

Lord, now 46, was sentenced to life in prison. His latest application for day parole was denied on Sept. 10.

Parole Board of Canada documents show Lord has repeatedly tried to appeal his first-degree murder convictions and his sentence, without success.

He has also been denied parole numerous times, largely because he has refused to admit his part in the murders.

Victim impact statements read aloud at the parole hearing indicate the families of the victims opposed Lord's application for release.

"They express their trauma and psychological harm as well as the deep loss they continue to suffer as a result of not only the deaths of their loved ones but your refusal to accept responsibility," the parole board said.

The trial found that Huenemann had offered his two friends a car, a house and monthly salary for carrying out the murders.

Leatherbarrow's wealth was estimated at between $3 million and $4 million at the time of her death. With Leatherbarrow and her daughter out of the way, Darren Huenemann would have been the sole heir to the riches.

The two women had invited Lord and Muir over for dinner on the night they were killed. The table was set for four when the boys hit them over the head with crowbars until they were unconscious and then cut their throats with kitchen knives.

The boys tried to make it appear as though the women had been murdered during a robbery, but police found that money, jewelry and other expensive items had been left untouched.