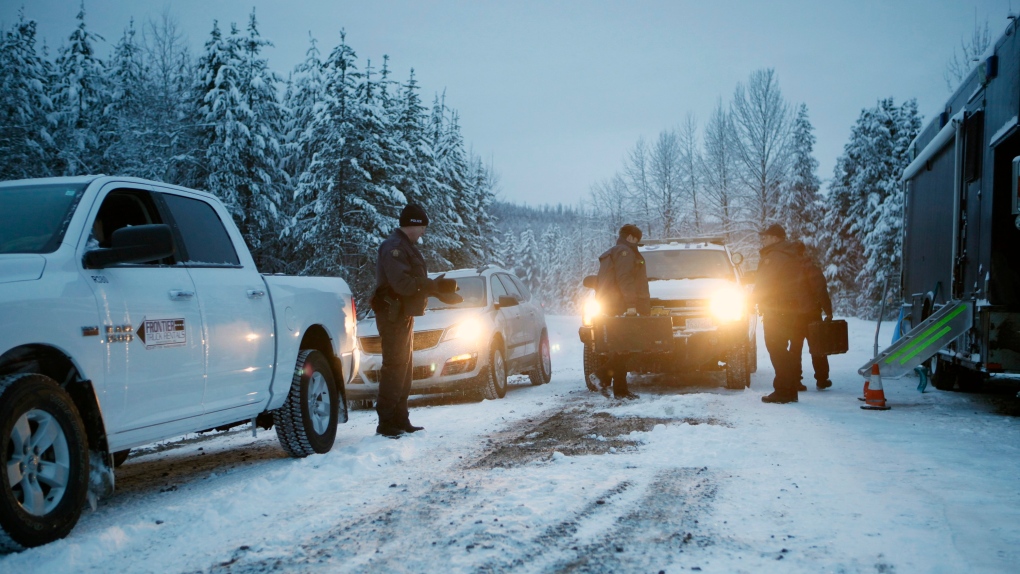 VANCOUVER -- The Wet'suwet'en hereditary clan chiefs and their supporters want a public investigation into the way the RCMP are controlling access along a rural road in northern British Columbia.

The RCMP have said they set up a checkpoint along the Morice Forest Service Road south of Houston in order to prevent a dispute over the Coastal GasLink pipeline from escalating.

But the chiefs along with the B.C. Civil Liberties Association and the Union of B.C. Indian Chiefs allege that the Mounties are unlawfully restricting access on Wet'suwet'en traditional territory.

“We cannot be criminalized for using our law to access our lands, our foods, our medicine, our way of life,” said Chief Na'moks, who dialled into a news conference Thursday.

The coalition has submitted a complaint to the Civilian Review and Complaints Commission for the RCMP, asking the chairperson to initiate a policy complaint and public interest investigation.

The RCMP could not immediately be reached for comment.

Harsha Walia, executive director of the civil liberties association, says the application of the RCMP's enforcement at the checkpoint has been “inconsistent, arbitrary and discriminatory.”

Walia says the coalition has submitted eight first-hand accounts from people turned away as part of the complaint. Some were told only lawyers licensed to practise in B.C. would be allowed through, or only hereditary chiefs on a pre-approved list.

“RCMP officers at the checkpoint have cited a range of inconsistent and shifting policies and procedures to those who are turned away,” she said at a news conference Thursday.

“Most of these do not in any way correlate to the stated goal of public safety.”

Officers check and record the identification of each person who arrives at the checkpoint, she said.

Irina Ceric, a non-practising lawyer who tried to visit supporters at a camp beyond the checkpoint, said she was turned away one day because she didn't have a two-way radio and tire chains but she was allowed through the next day with no questions from a different officer about her equipment.

The B.C. Supreme Court granted Coastal GasLink an injunction on Dec. 31. It called for the removal of any obstructions including cabins and gates on any roads, bridges or work sites the company has been authorized to use.

It also gives authorization to the RCMP to arrest and remove anyone police have “reasonable or probable grounds” to believe has knowledge of the order and is contravening it.

The RCMP have said there is also a criminal investigation underway into traps likely to cause bodily harm after patrol officers found felled trees along the road, and piles of tires with jugs of accelerant and fuel-soaked rags nearby.

Na'moks alleges that Strachan has called enforcement by the RCMP in the area “inevitable.”

“They are going to move in again, it is inevitable, is her words,” he said.

But he said they are in a holding pattern since the appointment of former New Democrat MP Nathan Cullen as provincial liaison tasked with de-escalating the dispute.

“Right now we are on pause.”

This report by The Canadian Press was first published Jan. 30, 2020.