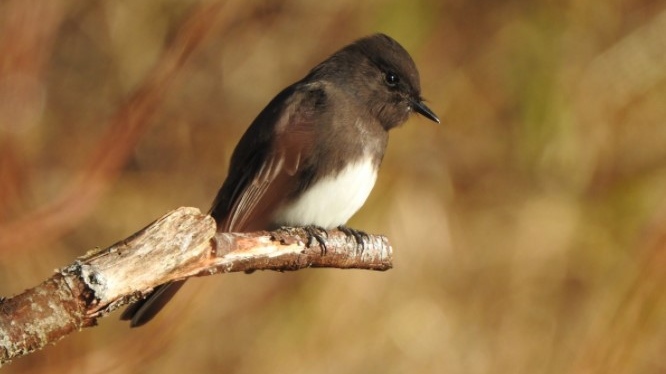 A black phoebe is pictured in Victoria. The species is usually only seen in California and Oregon: (Jody Wells)

Among the rare birds seen in the Victoria area on Dec. 19 when the count took place were a black phoebe – a flycatcher that usually calls California and Oregon home – and a Townsend’s solitaire that is only seen about once every 10 years in the region.

Ann Nightingale, organizer of the Victoria Christmas Bird Count, says that black phoebes have been increasing their northern range over the last few years and knows of two that are in the area. She was happy to include at least one this year’s count.

“This is a bird that tends to be quite solitary,” said Nightingale. “So there’s no real concern about it becoming invasive.”

There has also been a blue jay spotted in the UVic area. Nightingale was hoping to include the bird in the annual count, but it was too elusive on the day to be included in the tally.

To meet safety protocols and to ensure physical distancing due to the pandemic, Nightingale says the count was organized differently than years past with smaller groups covering more ground. In total, a 24-kilometre-radius area was focused on.

Nightingale also says the number of volunteers exceeded her expectations, with only 10 fewer coming out to help than last year, which was a record number of 280 participants.

“Birding is a great pastime even during a pandemic,” said Nightingale “We’re allowed to go out for a walk and you can carry your binoculars while you’re walking, or your camera, and start taking note of the birds around you.”

Nightingales says she will be in Duncan on Friday, Jan. 1, to carry out another bird count.

To learn more or to register for next year’s bird count click here.

Earlier this month, another rare bird, a common pochard duck, was spotted in Victoria. The rare bird is believed to be the first recorded common pochard sighting in B.C., and perhaps even all of Canada, say bird watchers.