PORT ALBERNI -- Even while his building was still smouldering, the owner and CEO of a Port Alberni mill was vowing that a large fire wouldn’t adversely affect his company.

Likening it to a phoenix rising out of the ashes, San Group President and CEO Karmal Sanghera says he is already planning to rebuild.

The company was in the process of opening up a new value-added moulding and finger-jointing mill in Port Alberni and was a few weeks away from starting operations when a fire tore through part of the facility early Wednesday morning.

An administrative team chartered a helicopter to get them from Langley into Port Alberni to survey the damage but hadn't been allowed into the building yet.

"As soon as they allow us to get in, we're going to get the machines out, get it fixed and get it on," said Sanghera.

The CEO says the hunt is already on for replacement equipment and his engineers are already getting ready to replace the large metal building that was destroyed in the fire. 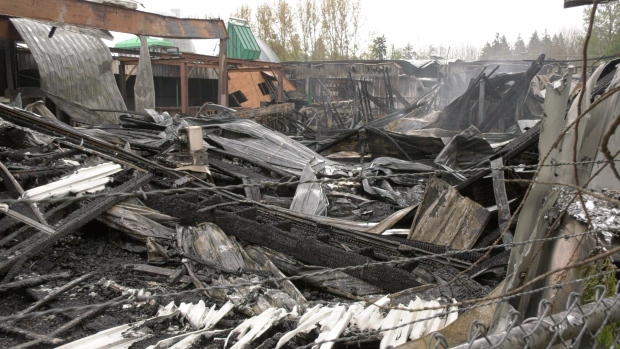 Sanghera says two other sections of the Alberni operation were unaffected by the fire and should be able to start functioning in the next few weeks.

He says nothing in the building that caught on fire was powered up yet. He's says he's leaving it up to the professionals to determine what the cause of the blaze was.

"We upgraded while in route to an automatic aid agreement with fire crews from Sproat Lake, Beaver Creek and Cherry Creek Fire Departments," said Owens. "Crews were able to quickly establish a water supply and start working on the fire."

Owens says crews concentrated on stopping the flames from spreading to other nearby structures and wood supplies by focusing on the building where the fire originated.

He says the Officer of the Fire Commissioner will be sending an investigator to the scene to assist with looking into a cause.

"It is a large fire ground and a complex investigation and we want to make sure we get it right," said Owens.

150 employees work at the entire Port Alberni San Group site, and Sanghera says there will be no jobs lost as a result of the fire.