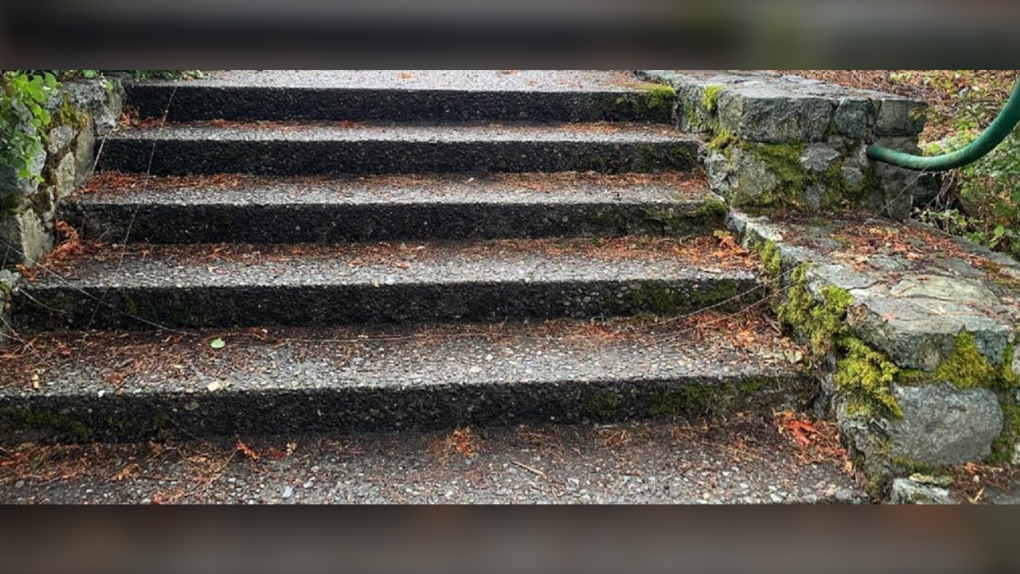 Police in Victoria say they discovered "trip wires" set up in a park in the city's Burnside Gorge neighbourhood earlier this week. They say this photo was taken after officers had stepped on the wires. (Victoria Police Department)

VANCOUVER -- Police in Victoria say they discovered "trip wires" set up in a park in the city's Burnside Gorge neighbourhood earlier this week.

Patrol officers from the Victoria Police Department made the discovery while assisting Victoria bylaw officers in Cecelia Ravine Park Thursday morning around 9 a.m., according to a news release from VicPD.

The officers noticed semi-transparent fishing lines set across a staircase in the park, between one and two feet off the ground, police say, adding that the lines were tied to poles on either side of the staircase.

Officers also noticed a fishing line set up at a similar height between two trees near an entrance to the Galloping Goose Trail in the park, according to VicPD.

Victoria police are investigating the incident. They ask anyone with information to call their non-emergency line at 250-995-7654 and select option 1 for the report desk. Tips can also be provided anonymously through Crime Stoppers at 800-222-8477.

Cecelia Ravine Park is the site of one of four homeless encampments currently set up in the City of Victoria. There are also several hotels in the surrounding area that the provincial government is using to house the homeless during the COVID-19 pandemic.

As the camp was developing last month, residents living in the Burnside Gorge area expressed concern about an ongoing increase in crime in the neighbourhood, something Victoria police also noted.

Police said they would be increasing patrols in the area, as well as in Beacon Hill Park, as a result of residents' concerns.

Police did not say whether they believe the trip wires have anything to do with the tent city.