VICTORIA -- More than 100 protesters are currently occupying the steps of the B.C. legislature building in Victoria. And it appears they're planning to stay.

The protest began shortly after 3 p.m. Monday with activists demonstrating their support for Wet'suwet'en First Nation hereditary chiefs who are opposed to the construction of a natural gas pipeline in northern B.C. 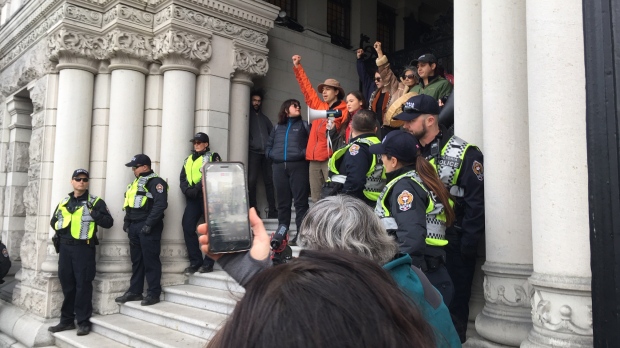 Protesters and police clashed as several activists charged the entrance to the legislature and police tried to stop them.

Protests and rail blockades have erupted across Canada since the RCMP enforced a court injunction against Indigenous people trying to stop construction of the Coastal GasLink pipeline near Houston, B.C.

Protesters just rushed the doors past the police. Now being cheered on by crowd. #bcleg #WetsuwetenSolidarity pic.twitter.com/65CMuZWXuO

On Feb. 13, the Speaker of the Legislative Assembly of B.C. won an injunction preventing anyone from blocking doorways or driveways at the B.C. legislature. 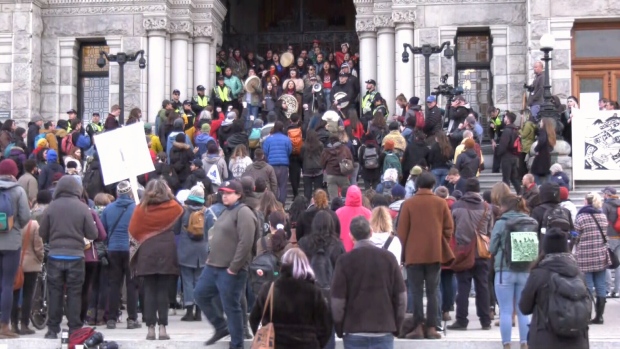 The injunction, which was granted at B.C. Supreme Court, restricts activists from obstructing, intimidating or interfering with legislative staff, security or government workers on the legislature grounds.

The injunction does not bar demonstrators from being on the grounds.