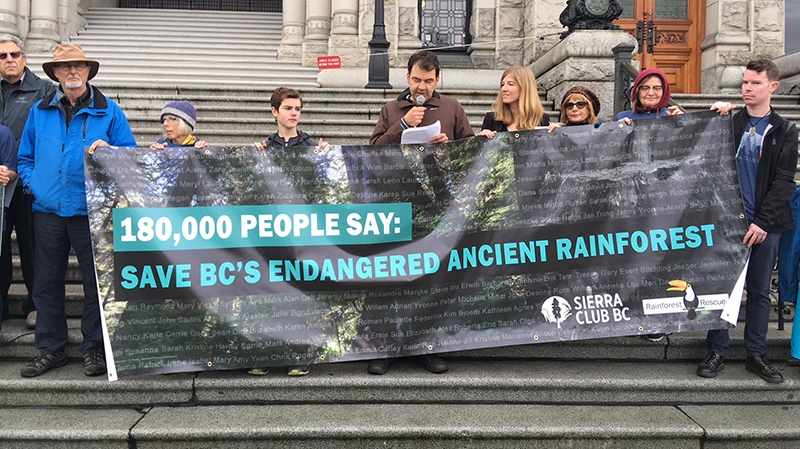 Several groups including Sierra Club BC and Rainforest Rescue unfurled a giant banner on the steps of the legislature to hammer their message of conservation home. Oct. 25, 2018. (CTV Vancouver Island)

Environmentalists delivered a 185,000-signature petition to the B.C. legislature Thursday, calling on politicians to save the province's last ancient rainforest.

Several groups including Sierra Club BC and German-based Rainforest Rescue unfurled a giant banner on the steps of the legislature to hammer their message home.

The groups say clear-cutting of B.C.'s old-growth forests not only hurts the province's tourism industry, it also threatens biodiversity and Indigenous cultural values.

They want the province to enact an immediate ban on logging in Vancouver Island's Central Walbran Valley, which is home to massive old-growth trees.

Earlier this year, Sierra Club released a new map showing the scarcity of old-growth rainforests on the island, calling them "as rare as white rhinos."

They claimed that the most endangered rainforest area now only covers just over six per cent of the island.

In 2015, Port Renfrew's Chamber of Commerce called on the then-Liberal government to immediately ban logging in the unprotected part of the valley, saying it was critical to draw tourists to the area.