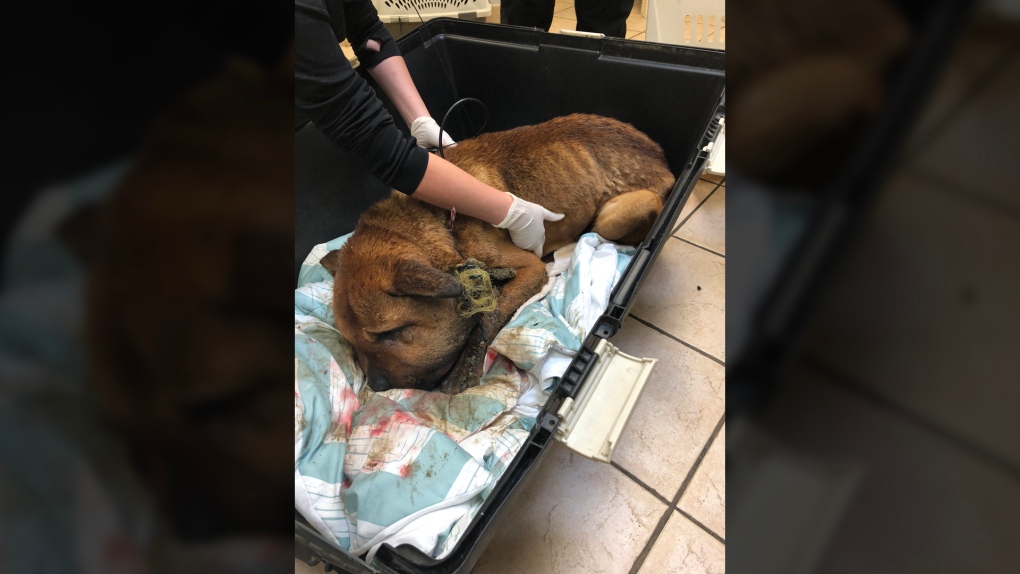 The festering wound was so infected, the dog's head had swollen to nearly three times its normal size, the SPCA said. (BC SPCA)

Tens of thousands of people have signed an online petition asking Crown to seek the maximum penalty for a Duncan couple accused in a horrific case of dog abuse.

A petition titled "Justice for Teddy" launched over the weekend had been signed more than 37,000 times as of noon Monday.

Last week, the BC SPCA announced cruelty charges had been laid against Anderson Joe and Melissa Tooshley after constables seized a severely emaciated and infected dog Feb. 16.

The dog was found on a chain only inches long standing in a pile of mud and feces, according to the SPCA. They said the dog's collar was so deeply embedded in his neck that the wound became infected and caused his head to swell to nearly three times its normal size.

Despite round-the-clock emergency care, the dog succumbed to his injuries days after being seized.

The petition is calling on Crown and Nanaimo-North Cowichan MLA Doug Routley to pursue the maximum penalty faced by Joe and Tooshley if they're convicted: Up to five years in prison, a $10,000 fine and a lifetime ban on owning animals.

"We are petitioning Crown counsel and our local MLA Doug Routley to ask that the maximum penalty be imposed on Anderson Joe and Melissa Tooshely for their horrific act of animal abuse," the petition reads.

A woman claiming to be Tooshley's mother posted a video to Facebook last week, pleading with the public for understanding.

Joann Daniels said the negative backlash against her daughter has her scared to send her kids to school.

"She's scared to send her kids to school because of the way people are getting towards her, and she had to take herself off Facebook because of all the mean and cruel things that are being said," she said in the video. "By all means, this is no excuse for what happened to that poor dog."

She said the dog was "kind of a mean dog," and that due to numerous personal issues including injury and a recent birth, "things all happened at once" for the couple.

"I know there's a lot of cruel things people are really judging my daughter for, but things couldn't be helped and I'm asking all of you to, whoever sees this, not to judge them so harshly," she said.

Tooshley and Joe are set to make their next court appearances on April 3.