Overdoses continue to spike in Greater Victoria amid deadly week 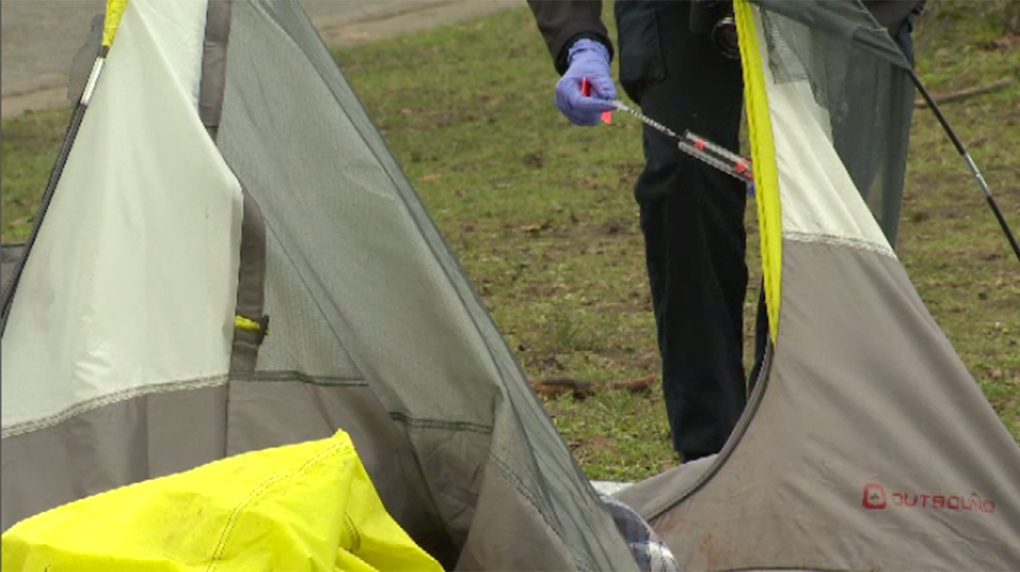 Police remove a syringe from a tent in an encampment at the Victoria Courthouse, Sat., Dec. 26, 2015. (CTV Vancouver Island)

Paramedics reportedly used a naloxone kit three times to resuscitate a man who was found unresponsive inside the bathroom of a shelter off Balmoral Street.

An hour later a man was found unresponsive at an apartment complex in the 1000-block of Fairfield Road.

Crews administered first aid, and the man was able to walk out of the building on his own and go to hospital.

On Tuesday, police responded to the Travelodge Hotel in Victoria Tuesday morning for another suspected non-fatal overdose. They also attended an early morning and mid-morning overdose at the tent city encampment at the Victoria Courthouse.

Police and the BC Coroners Service have been sounding the alarm about the recent spate of apparent overdose deaths.

“We’ve had to go out and speak with some families and give them sad news over what should be a festive season,” said Saanich Police spokesman Sgt. Dean Jantzen. “So we really want to get the message out that these substances are out there, and really remain vigilant and be cognizant of your safety.”

The coroner has confirmed at least one of the recent deaths was caused by a highly potent drug cocktail that included fentanyl, but it’s unclear if the potentially lethal drug is involved in the other deaths.

Those include a James Bay man, two men at the same Saanich address, a woman in Langford, a woman in Esquimalt and one in Sooke.

A man died on Saturday at the tent city encampment at the Victoria Courthouse.

Sooke RCMP said Tuesday they were investigating whether an intravenous overdose death that occurred on Boxing Day is linked to tainted drugs.