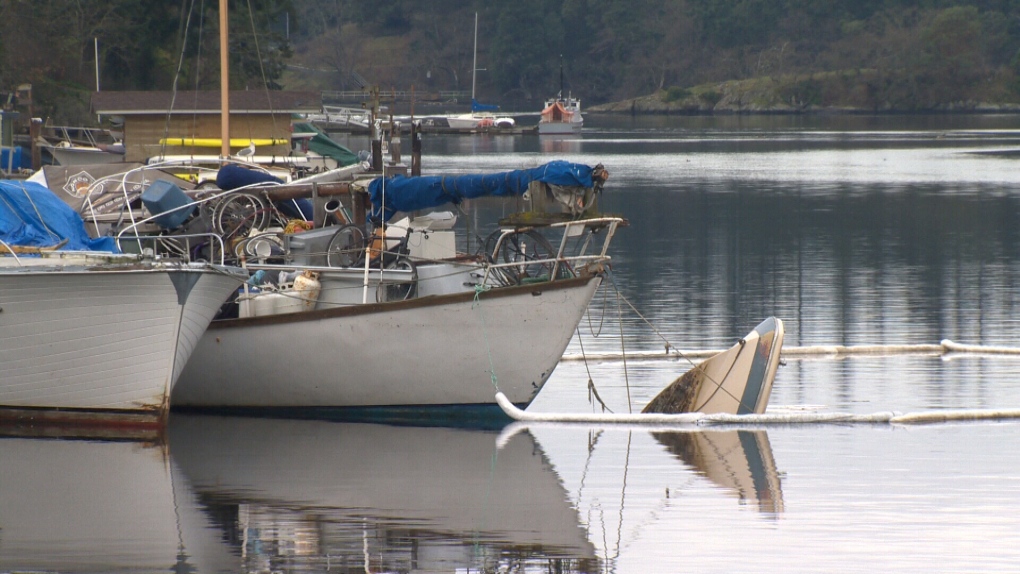 An oil containment boom is set up around a sunken derelict boat in the Gorge Waterway in Victoria, B.C., Sun. Dec. 27, 2015. (CTV Vancouver Island)

The latest oil spill from a derelict boat in Victoria’s Gorge Waterway has residents demanding the city take action to clean up the area, but the city says it's not that simple.

Fire crews responded to the spill in the water near Banfield Park Sunday morning, placing booms around the visible sheen of oil to contain it.

The Canadian Coast Guard has since taken over the case, but those living near the spill say abandoned boats have been a problem there for more than a decade – and enough is enough.

“My biggest fear is this will get forgotten and we’ll have another 20 boats, and we’ll have fires and we’ll have tragedies, we’ll have, perhaps, a death on one of these boats” said former city councillor Shellie Gudgeon. “That spill this morning, if birds are in that shoreline – which they are, it’s a migratory bird sanctuary – those birds are going to be damaged.”

A group representing concerned residents says even though Victoria city council passed a bylaw that allows it to force overnight boaters out of the waterway, there has been no enforcement, sparking confusion about who is responsible for dealing with the derelict boats.

“The water is like air, it flows where it wants to flow, you’re not going to be able to stop it,” said Rob Wickson, president of the Gorge Tillicum Community Association. “So if a spill happens in Victoria, the next tide can bring it up to Saanich and into Esquimalt, even View Royal. But who takes care of it? Who’s in charge of fixing it? Is it Victoria’s job to fix it? Is it Saanich’s job to fix it? Whose resources are being used for it? We don’t know.”

Victoria Mayor Lisa Helps says her council is working slowly because all levels of government are involved with the small plot of land – but that her goal is to move the boats eventually.

“It’s complex, it’s not like a city park where the city has easy jurisdiction,” Helps said. “These things take time, this isn’t the wild west. There are private property rights, there are all sorts of things we need to consider. The boats have been there for a long time. Hopefully it won’t take us as long as they’ve been there to get them cleaned up.”

She said oil spills such as Sunday’s put additional pressure on the city to get something done.

Helps also said the city is currently looking at the recently passed bylaw giving them the power to evict overnight mooring, to make sure it doesn’t contradict federal law.

“We’re seeing a bit of a clash, and that is something that we’re going to need to sort out,” she said.

Crews in Esquimalt had to mop up an oil spill in the waterway last month after public works crews noticed a sheen in the water near Sioux Place and Esquimalt Gorge Park.