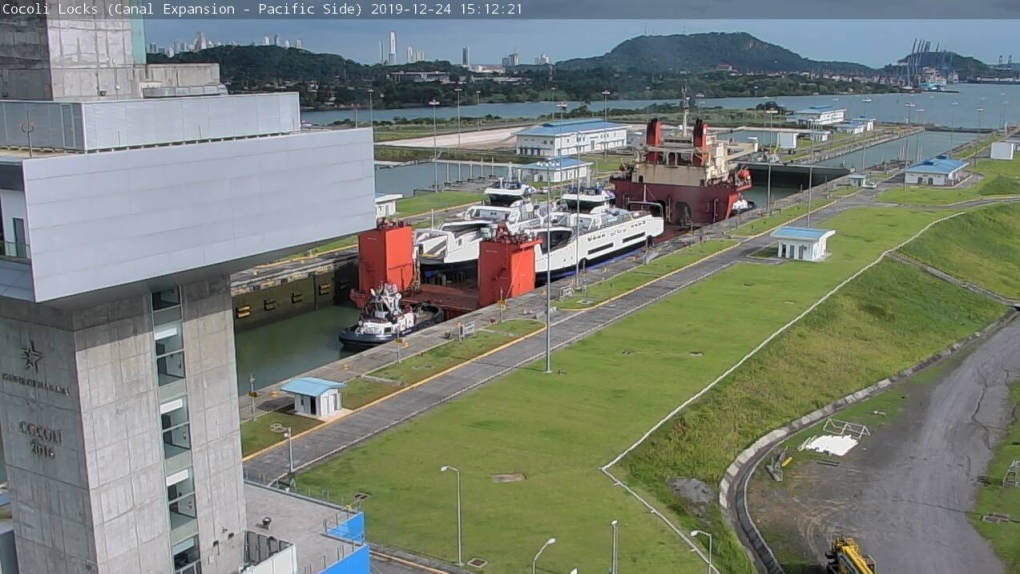 BC Ferries' new hybrid electric ferries are seen aboard the Sun Rise transport ship making their way through the Panama Canal: (BC Ferries)

The pair of "Island Class" ferries are expected to reach the island in early 2020, and are scheduled to enter service on shorter island routes by mid-2020.

The two hybrid electric ferries are being transported to Victoria aboard the Sun Rise transport ship, which is a semi-submersible vessel. Once the Sun Rise arrives at the Point Hope Maritime in Victoria, the ship will submerge itself to allow the two Island Class ferries to float into their berths.

The location of the Sun Rise can be tracked online at vesselfinder.com. As of Dec. 27, the vessel – now clear of the Panama Canal – was making its way north past the coast of Costa Rica to complete its 10,305-nautical mile journey from Romania to Victoria.

A timelapse video of the Sun Rise making its way through the crowded canal can be viewed online here.

According to BC Ferries, each Island Class vessel will be able to carry 47 vehicles and up to 300 passengers. The first two ferries will service a number of island routes, including the Powell River-Texada Island and Port McNeill-Alert Bay-Sointula routes.

In November, before the first pair of vessels even arrived, BC Ferries announced that it had ordered the construction of four more hybrid electric ships.

The next four ships are expected to enter service by 2022, and will service the Campbell River-Quadra Island and Nanaimo Harbour-Gabriola Island routes.