VICTORIA -- New data released by the province Thursday offers a revealing look into the COVID-19 pandemic in B.C., including how the virus spread and where it has hit hardest.

On Vancouver Island, the majority of cases have been found – surprisingly – in the island's northern region, which includes part of the mainland's central coast.

Island Health recorded 59 cases in the sparsely populated northern region between Jan. 22 and May 31. The more densely populated South Island, meanwhile, has recorded 43 positive-test cases for COVID-19 during the same period. The Central Island region has seen just 25 cases.

Of the 127 cases on Vancouver Island before June, 121 patients had fully recovered, five had died and one person was in intensive care. 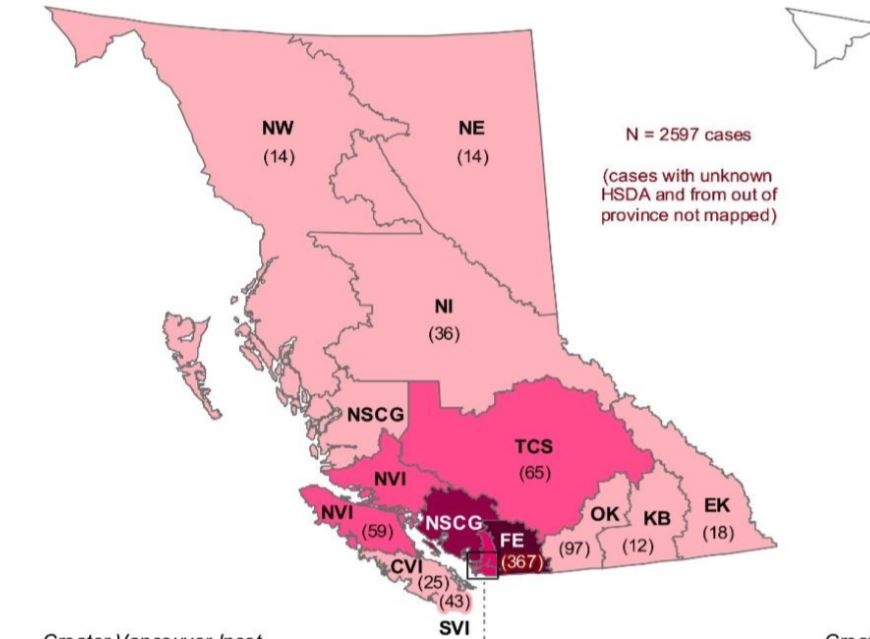 On Thursday, provincial health officer Dr. Bonnie Henry laid out the path the virus took to B.C. and how it spread once here.

The very earliest cases of the novel coronavirus in B.C. were found in January and originated in China, particularly from the Wuhan region.

Those cases were followed shortly thereafter with cases originating in Iran. Health officials were able to discover this by examining the different genomes in the two strains of the virus. These earliest cases, however, did not lead to widespread transmission in B.C.

COVID-19 infections only took off after a Vancouver dental conference in early March spread a strain of the virus that had more in common with European and Eastern Canada strains.

Around the same time, a coronavirus strain from Washington state was starting to appear and these two strains became the dominant sources of infections in B.C., according to health officials.

Henry also revealed new details about some of the most serious cases of COVID-19 in B.C.

Young people in B.C. have been hospitalized for the illness, including two children under the age of 10 and one person between 10 and 19 years old.

Four people between the ages of 20 and 29 have been sick enough to need treatment in the intensive care unit.