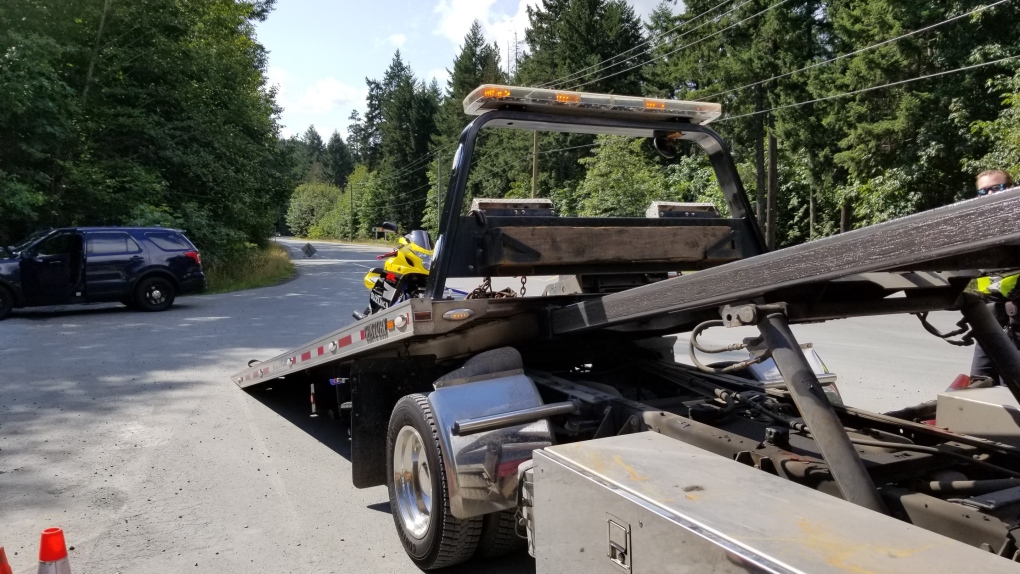 Police in Saanich have impounded a motorcycle after catching it travelling at "an extremely high rate of speed." (Saanich Police

Police in Saanich have impounded a motorcycle after catching it travelling at "an extremely high rate of speed."

The incident took place in the 200 block of Willis Point Road on Thursday afternoon. Officers from the Saanich Police Department's Traffic Safety Unit were conducting "speed enforcement" in the area when the yellow Suzuki street bike passed through the area.

When police pulled over the motorcycle, they found that its licence plate had been bent in a way that made it less visible.

Police issued the 22-year-old driver a ticket for excessive speeding and improperly displaying his licence plate. They also impounded the bike.

The incident was the second instance of excessive speed police dealt with Thursday afternoon. Earlier in the day, officers caught a car going 63 km/h in a playground zone, where the speed limit is 30 km/h from dawn until dusk.

That driver was travelling through the 4400 block of Emily Carr Drive when police spotted him. After pulling him over, police concluded he was under the influence of alcohol.

His vehicle was also impounded.

On Friday, Saanich police tweeted about both cases.

Then they issued a ticket to a driver of a motorcycle doing over 120km/h in a 60 km/h zone....his bike was impounded too.

"Statistics show that speed is a contributing factor in a large percentage of collisions," Kowalewich said. "Our Traffic Safety Unit will continue to actively enforce speed related offences in Saanich in an effort to keep the roads safe for all drivers, cyclists, and pedestrians."