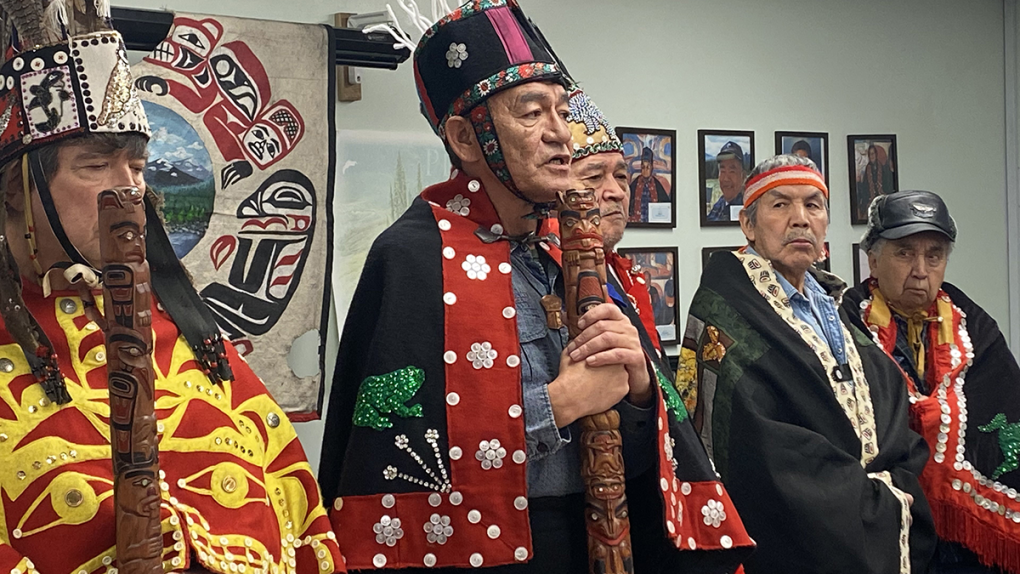 Na'moks held a press conference in Smithers, B.C., Tuesday, Jan.7, 2020, on the one-year anniversary of RCMP enforcement of an injunction granted to Coastal GasLink. (Amy Smart / THE CANADIAN PRESS)

BURNS LAKE, B.C. -- A collective of First Nations who support the liquefied natural gas industry in British Columbia say human rights advocates failed to do their research when they called for a pipeline project to be halted.

The First Nations LNG Alliance has issued open letters to the B.C. human rights commissioner and the United Nations Committee to End Racial Discrimination over statements they made about the Coastal GasLink project.

They called for the project to be stopped in the face of opposition from Wet'suwet'en hereditary clan chiefs who say the project has no authority without their consent.

Both said the free, prior and informed consent of all affected Indigenous groups should be granted before any project is allowed to proceed.

Coastal GasLink has signed agreements with 20 elected First Nation councils along the pipeline's 670-kilometre path but the Wet'suwet'en chiefs say within their territory, those councils only administer small reserves and it's the hereditary chiefs who hold jurisdiction over a broader area covering 22,000 square kilometres.

Karen Ogen-Toews, CEO of the First Nations Alliance, says in the letter to commissioner Kasari Govender that the pipeline was approved through a democratic process that Indigenous people participated in freely, and neither the committee nor commissioner consulted supportive Indigenous groups before taking a position.

No one could be reached for comment at the UN committee and Govender was not available for an interview Tuesday.

“It is disheartening to see that the input from 20 First Nations, who participated extensively during five years of consultation on the pipeline, and have successfully negotiated agreements with Coastal GasLink, is so easily dismissed by the B.C. Human Rights Commission,” Ogen-Toews says in one of the open letters.

The letter accuses Govender of ignoring the social and economic benefits already realized by workers and communities from the project. More than one-third of work on the project has been completed by Indigenous people and Coastal GasLink has earmarked $620 million in contracting opportunities for First Nations in the province, it says.

The letter also accuses both the provincial commission and the UN committee of issuing public statements without talking to supportive First Nations.

“Both groups know nothing about the importance we place on finding a way out of endlessly trying to manage poverty, and finding the kind of opportunities for our First Nations people that non-Indigenous people have enjoyed for centuries,” the letter says.

Na'moks, a spokesman for the Wet'suwet'en hereditary clan chiefs, has said they will never consent to the project.

The chiefs issued an eviction notice to Coastal GasLink after the B.C. Supreme Court extended an injunction on Dec. 31 to the company.

The RCMP has established a checkpoint along a logging road that leads to a pipeline work site, as well as two camps and a small settlement established by supporters of the hereditary chiefs.

Last year, 14 people were arrested when the RCMP enforced a previous injunction granted to the company.

This report by The Canadian Press was first published Jan. 21, 2020.