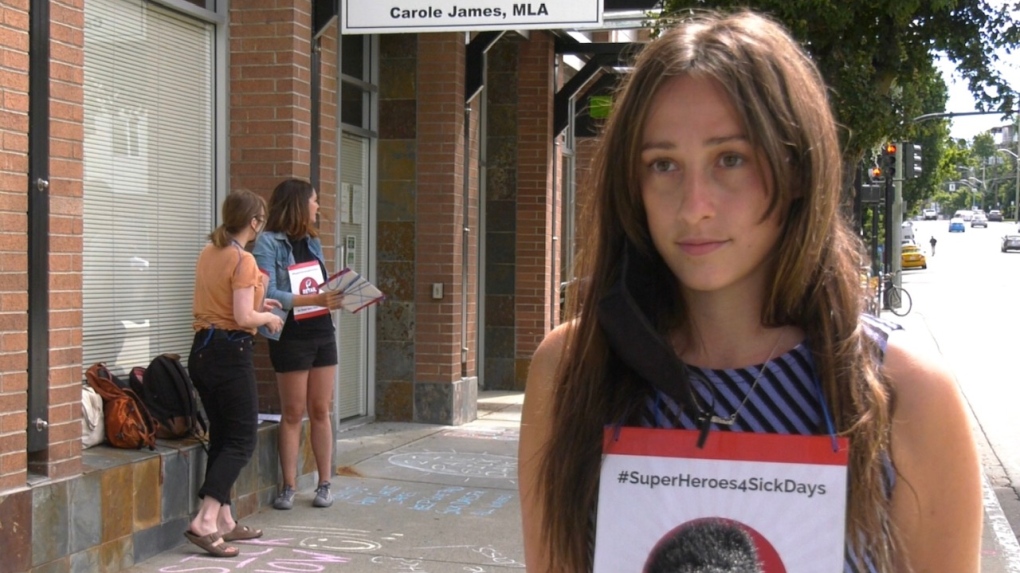 Hundreds of people have signed a petition drafted by two workers rights advocacy groups that calls for the creation of paid sick leave in B.C.: June 22, 2020 (CTV News)

VICTORIA -- As the BC Legislature reopened its doors to politicians Monday, a petition with more than 700 signatures was being handed over to the B.C. government calling for paid sick leave for all workers in the province.

The Retail Action Network and the BC Employment Standards Coalition were outside B.C. Finance Minister Carol James’ constituency office Monday morning looking to hand over the petition.

The small group of workers rights advocates wrote messages in chalk on the sidewalk asking for the paid sick leave, hoping to present the petition to the minister in person.

The office was closed Monday, so the petition was sent to Premier John Horgan and B.C. Minister of Labour Harry Bains.

The petition urges the B.C. government to immediately provide workers with 21 paid sick days for the duration of the pandemic.

The group says the petition has been endorsed by labour unions, community groups and labour councils.

Advocates are also asking for paid sick days on a permanent basis under the B.C. Employment Standards Act, based on accrued hours worked.

“As it’s been demonstrated during the pandemic, there are plenty of workers that are having to stay home because they are sick without pay,” said Pamela Charron, solidarity steward coordinator for the Retail Action Network.

The Retail Action Network says there is currently no legislation in B.C. that provides workers with paid sick days. Under the B.C. Employment Standards Act, employees are entitled to three unpaid days off work for reasons related to illness.

Meanwhile, workers are only guaranteed unpaid job protection for taking time off if they contract COVID-19.

“Businesses, including restaurants and retail stores, have reopened but workers are being left behind in BC’s Restart Plan,” said Charron.

“People are being called back to work without having access to paid sick days,” she said.

According to the group, New research shows that 89 per cent of workers in B.C. who earn less that $30,000 a year don’t receive paid sick days from their employers.

The petition calls for three steps for the provincial government to immediately take:

1. To provide employees, regardless of their employment status (full time, part time, casual) or length of service, with the right to a paid sick leave.

2. In response to the COVID-19 emergency, that the Employment Standards Act should immediately provide for paid sick leave for at least 21 days for employees for the duration of the emergency, without a minimum employment requirement and without a requirement for proof of sickness.

3. At the end of the COVID-19 public health emergency the Employment Standards Act should contain, on a permanent basis, a paid sick leave provision.

With the possibility of a second wave of COVID-19 sweeping across B.C., the Retail Action Network and the Employment Standards Coalition believe that the lack of paid sick days is concerning for the health of workers and the health of the public at large.

The Retail Action Network says the federal government has committed to talking with provinces and territories about introducing 10 paid sick days for workers during the pandemic. But, B.C. has yet to introduce any plans for providing paid sick leave, says the advocacy group.

On Monday, B.C. Minister of Labour Harry Bains said that the provincial government was still developing a framework for paid sick leave.

“The details of that are being worked out now between the federal government and the provinces and as soon as those details are clear, we will be making some announcement at that time,” said Bains at a news conference.

When asked about when workers might see paid sick leave in their workplace, Bains said that it was hard to put a timeline on it right now.

“So, each province, working with the federal government, will put some guidelines together and make sure that it works well for the workers and at the same time doesn’t put an added burden on the employers as well,” said Bains.

There was no mention from the minister of permanent paid sick leave for workers after the pandemic ends.

For further information on the Retail Action Network’s petition, visit its website here.