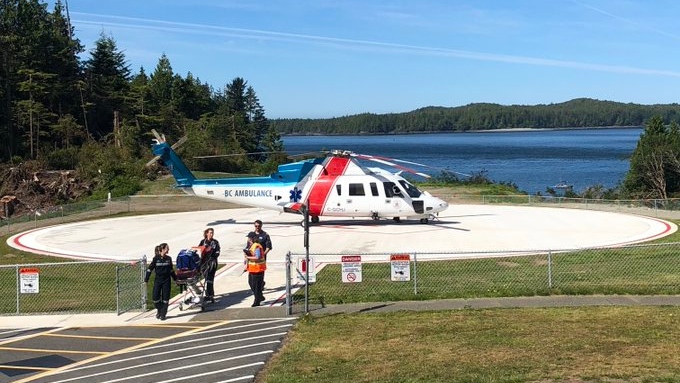 After a lengthy eight-year delay, a new helipad has finally opened at Tofino General Hospital (TGH).

The helipad will be used to airlift patients who are in immediate need of care at the hospital, or who need to be transported to a different hospital quickly.

According to Island Health, air ambulance helicopters transfer more than 20 patients to and from Tofino each year.

“The Tofino hospital helipad is crucial to helping BC Emergency Health Services paramedics meet the needs of patients who need hospital transfers, or require an air ambulance response in the community,” said BCEHS chief operating officer Barb Fitzsimmons in a news release on Wednesday.

The hospital's previous helipad was closed by Transport Canada back in 2011 after it was deemed in need of improvements.

In the eight years since, TGH tried to find a new location for another helipad. The search lasted until 2016, when land owned by the Tofino General Hospital Foundation became available. Once the location was found, the hospital and other community organizations spent years raising funds to create the new helipad.

Between 2011 and 2019, patients that required an air ambulance had to be dropped off at the Tofino airport and then transported to the hospital by ground.

“No one wants to think about needing an emergency trip to a hospital in Victoria or Vancouver, but it’s absolutely essential that we can provide it when necessary,” said Tofino Mayor Josie Osborne.

"This helipad is a critical piece of infrastructure for the West Coast region, and we are grateful to see it completed.”

Since the start of this year, 26 patients have been airlifted from TGH to another hospital by air ambulance.