The total damage is unclear, but no one was hurt after a fire broke out at an iconic pub in Victoria on Wednesday.

Firefighters were called to Spinnakers Gastro Brewpub on Catherine Street in Vic West around 1:30 p.m.

Heavy smoke could be seen pouring from the building and flames were spotted on the roof near the chimney. 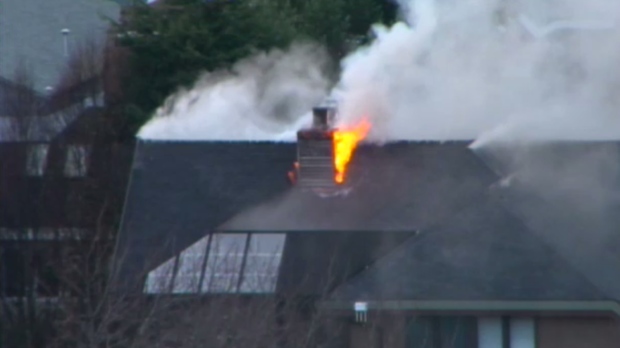 Restaurant patron Steve Menzies said he was having lunch on the second floor when he saw smoke.

“All of a sudden some smoke started backfeeding out of the fireplace,” said Menzies. “I walked outside to get some fresh air and it went from normal to smoke in a minute.”

One staff member tried to put out the blaze in the fireplace, but it was too late, he said.

“It’s going to be unfortunate. There’ll be a lot of damage up on the second floor because there was a lot of heat in there, you could hear it. The crackling of the burning upstairs.”

He said patrons exited in an orderly fashion and staff members were “excellent” at guiding them out of the restaurant.

Spinnakers, the oldest gastro brewpub in Canada, posted on Facebook just after 2 p.m. that firefighters had the blaze under control and no one inside the pub was hurt.

"A sad day for us, please be patient as restaurant hours will be affected while we work to restore the damage," the pub said.

Staff at the restaurant told CTV Vancouver Island reporter Scott Cunningham that the fire started in the upstairs fireplace.

Firefighters could be seen on the roof attacking flames shooting from the chimney more than an hour after the blaze broke out.

Investigators said the building suffered major fire, smoke and water damage, but an exact dollar amount has not been determined.

"The roof is pretty much, on the back half, totally torn off," said Brad Sifert. "We're going to come back tomorrow in the light and have another look at what happened."

There's no timeframe on when the pub may reopen.

Holy hell @Spinnakers is on fire! I hope everyone got out ok. #yyjnews pic.twitter.com/145khRvPQg