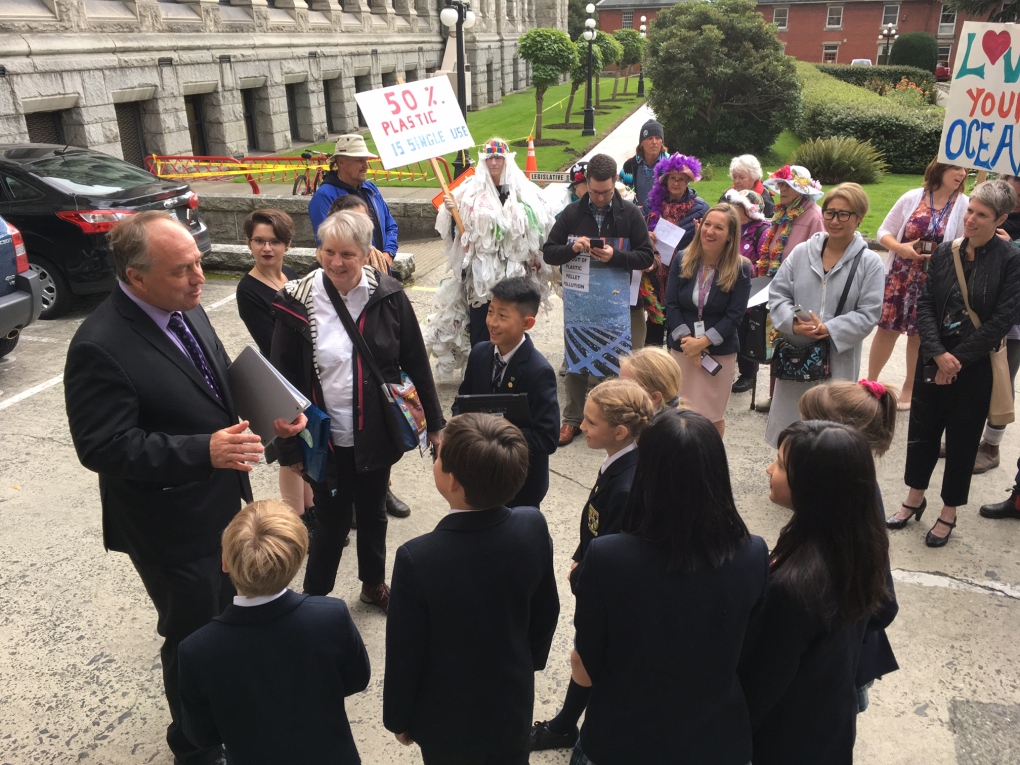 Three groups have teamed up with a common goal in mind – asking the B.C. government to ban single-use plastics.

Kids for a Plastic Free Canada, Surfrider Foundation of Vancouver Island and the University of Victoria's (UVic) Environmental Law Centre held a rally Tuesday to urge the province to get rid of the polluting plastics.

Surfrider Foundation Vancouver Island has called upon Environment Minister George Heyman to grant municipalities the authority to implement plastic bylaws in their own jurisdictions.

"This is very important right now," said Chris-Ann Lake, chapter manager of the Surfrider Foundation. "We are culminating to a very critical point. International news is all focused on plastics, the state of recycling, holding industry and producers accountable. So this is a very timely position we are taking now."

Surfrider Vancouver Island describes itself as a "community of everyday people who passionately protect our playground the ocean, waves, and beaches that provide so much enjoyment for everyone."

Before the rally, the organization collected roughly one thousand signatures on a petition asking the province to widen their ban on more single-use plastic items than just plastic bags. The petition was handed over to Andrew Weaver, leader of the provincial Green Party, to present in the House of the B.C. Legislature.

Meanwhile, Kids for a Plastic Free Canada — an environmental group created by two Victoria students — Anastasia Castro and Char Brady, was also in attendance at the rally. They founding pair wants to help students take action on stopping the use of throwaway plastics.

Char Brady, a grade twelve student at Glenlyon Norfolk School, said, "[We're] seeing our planet die year after year because of something that is easy enough for us to fix".

She added that provincial legislation and changing the way we use single-use plastics would go a long way to solving the problem.

"Going to a more sustainable model, using reasonable alternatives, we have that in place," said Brady. "The only reason we're not doing that now is because we are allowing the problem to continue."

Both groups worked with UVic's Environmental Law Centre to develop a fifty page document with recommendations, solutions and guidelines to achieve the goal of eliminating single use plastics.

Kids for a Plastic Free Canada presented the document to Minister Heyman in a round table meeting during the rally. The group called on the B.C. government to implement their recommendations.

Minister Haymen responded by saying that the province was working on its own set of recommendations for single-use plastics. He added that he will take a close look at the document put forward by the groups and take their ideas under consideration.