Grey whale buried at Ucluelet dump exhumed, given to museum 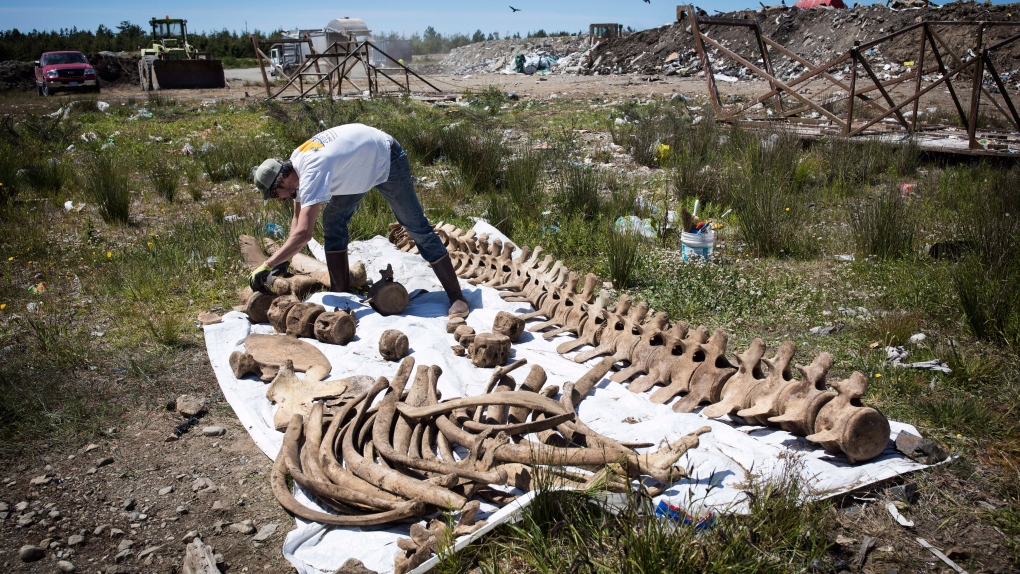 Mike deRoos, owner of Cetacea Contracting, brushes off the dirt from the bones of a grey whale that was buried at the Alberni-Clayoquot Regional District's West Coast Landfill on Thursday, May 31, 2018. THE CANADIAN PRESS/Melissa Renwick

UCLUELET, B.C. - They arrived at the dump ready to dig up a grey whale's grave, carrying shovels, rakes, brushes and small garden tools, hoping the decomposition process had done the job of cleaning the bones and deodorizing the carcass after being buried for more than three years.

A landfill on the west coast of Vancouver Island was the site of a unique event where scientists and about a dozen volunteers recently exhumed the 10-metre long whale.

When the body of the young female washed up on Wickaninnish Beach at Pacific Rim National Park Reserve in April 2015, officials had to act quickly: haul the marine mammal out to sea or save the skeleton by burying it at the local dump.

The decision was made to preserve the bones for science, and that's how a filter-feeding cetacean, which can reach lengths of almost 15 metres and weigh up to 36 tonnes, ended up covered in dirt at the Alberni-Clayoquot Regional District landfill in Ucluelet.

“It could have been towed offshore and just sunk and nature would have recycled it, and that's fine,” said Gavin Hanke, curator of vertebrate zoology at the Royal British Columbia Museum. “But this specimen now is available for anyone to look at.”

Bald eagles screeched overhead and garbage trucks rumbled in the distance as the digging crew approached the burial mound that resembled a forest after three years, thick with prickly blackberry bushes and one-metre tall alder saplings that swayed in the wind.

After about one hour of hacking, digging and raking, large bones started to emerge.

Hanke, who came prepared to work in a smelly whale mess, put his gloves to his face and smiled.

“The whale itself smells like soil,” he said. “It's fantastic. It doesn't faze me at all to do this.”

The bones will be cleaned, catalogued and become part of the provincial museum's marine mammal research collection, Hanke said.

Out of the burial site came individual vertebrae the size of small aircraft propellers and ribs longer than yard sticks. It took four people to lift the whale's intact skull and jaw into the back of a pickup.

“The material is available for scientists around the world to come and measure, study, take DNA samples and look for stable isotopes for ecology,” said Hanke. “Every animal is different, just like every human is different. That's why we collect so much.”

Carl Sieber said he was there when the whale was found on the beach, and he returned to use a rake to clear away dirt from the animal's bones.

He said everybody wondered about the cause of death, but a necropsy couldn't provide the answer.

Sieber said the area's Tla-o-qui-aht First Nation, who have hunted whales in the past, held a ceremony on the beach that involved boiling the whale's blubber in pots and keeping the oils.

Michi Main said she's put together many whale and other sea creature skeletons for museums and other institutions as part of the Saltspring Island cetacean articulation business she has with her husband, Mike deRoos.

“The landfill kindly let us put the skeleton here and bury it for this three-year period,” she said. “They have a fully enclosed site here, which means no bears or other predators.”

Josh McInnes, a marine biologist at University of Victoria, said having a recently deceased whale specimen to examine gives researchers opportunities to study the animal's life.

“By looking at these bones and looking at the health of the animal, it can tell us a lot about the biology and what's going on in the ecosystem,” he said. “It's important. These animals, they're indicators of what's really going on and how we're dealing with this.”

McInnes said he found the experience of digging up a whale's bones at a dump surreal and inspiring.

“Dumps are usually used for plastic, which is a huge issue right now for the environment, but why not put a whale here,” said McInnes.

Hanke said his first whale dig at a dump was a success.

“Basically, nature did the work for us and we've got nice clean bones now,” he said. 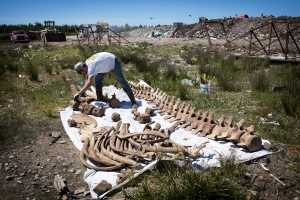