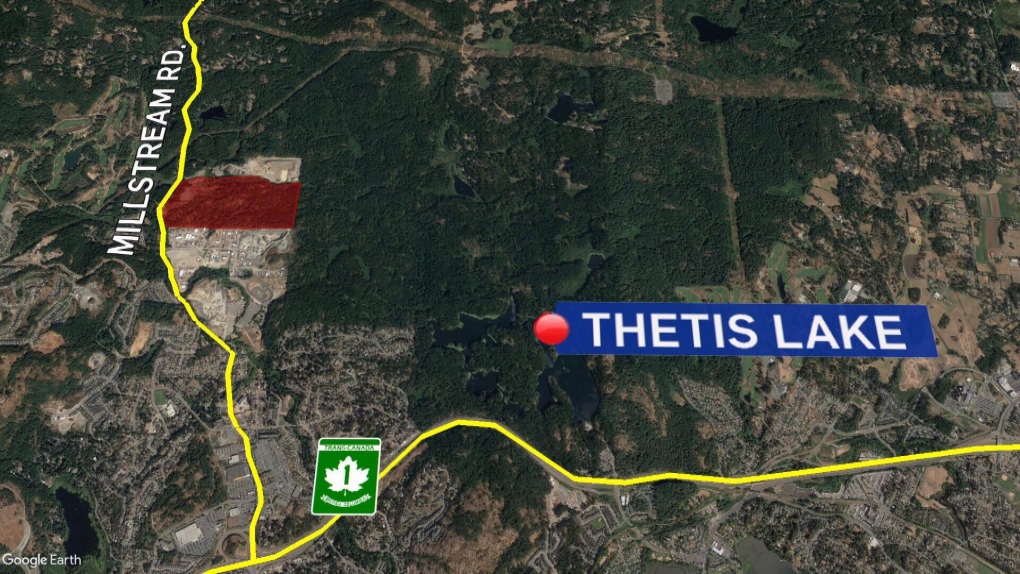 The proposed mining area is shown.

VICTORIA -- The Highlands District Community Association (HDCA) is filing an application with the BC Supreme Court calling for a review of a new rock quarry that was approved by the provincial government to open on Millstream Road near Thetis Lake.

The HDCA says that the quarry raises a number of concerns, including posing a risk to local drinking water, significant environmental impacts, possible impacts from noise and dust over the next two decades and an increase in traffic in the area.

The HDCA has been battling with the province and the operators of the potential mine, OK Industries (OKI), since the quarry was first proposed in 2016.

Since then, thousands of people have signed online petitions that oppose the mine, including more than 1,000 Highlands residents – representing almost half of the approximately 2,225 residents of the municipality.

Community members say they are most concerned about the mine contaminating the local aquifer, which supplies drinking water to the majority of the area.

“In its decision to approve this application, in our view the province has not adequately addressed the significant possibility that ongoing blasting will cause toxic contaminants from the adjacent Millstream Meadows, which is a historic liquid waste dump, to migrate towards and contaminate our drinking water,” said Scott Richardson, chair of the HDCA board of directors, in a release Friday.

The HDCA says that both the Highlands council and Capital Regional District have voiced opposition for the mine.

“Despite two levels of local government clearly opposing the development of the project over concern for protection of the district’s precious groundwater, the province has authorized mining of a commodity that is abundant on almost all parts of the Island,” said Richardson.

The HDCA says it has been trying to voice its opinion to the provincial government for years, but that its concerns have gone unheard.

The community association is now hoping that the BC Supreme Court will undertake a judicial review of the provincial government’s approval of the rock quarry.

“In the end, we were denied due process, and we believe the province hasn’t adequately addressed important public interest considerations, including the substantial health and safety, environmental and social concerns associated with this proposal,” said Richardson.

OK Industries first purchased the parcel of land in 2015. In 2018, the company told CTV News in a statement that the area is surrounded by other industrial sites, some of which already blast rock.