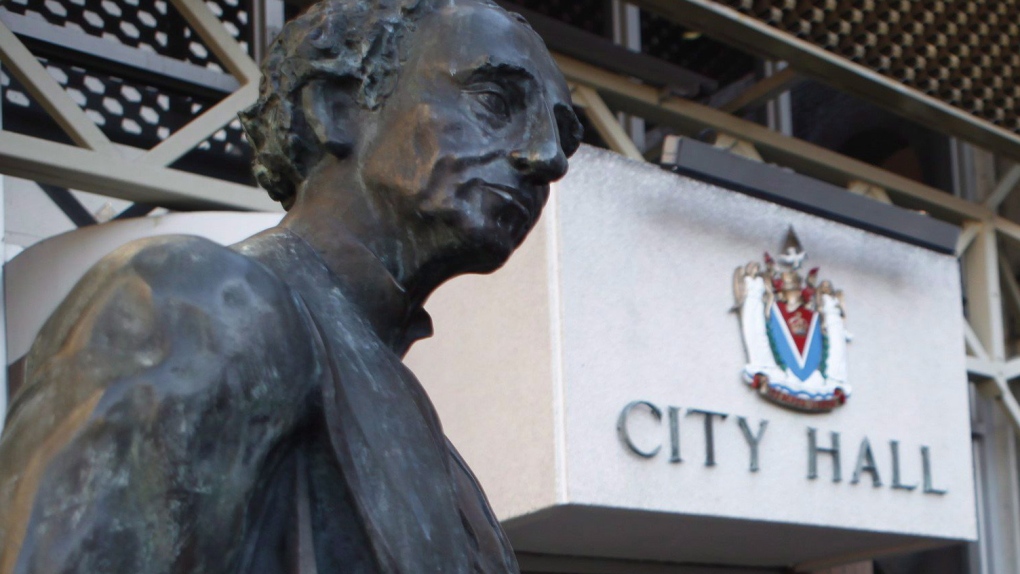 A statue of Sir John A. Macdonald is seen outside of City Hall in Victoria, B.C., Tuesday, January 31, 2017. (The Canadian Press/Chad Hipolito)

VICTORIA -- The City of Victoria is hosting a public meeting on the future of the city's controversial Sir John A. Macdonald statue Monday.

The city is asking participants to consider the historical context of Canada's first prime minister and to consider what role would be appropriate for the statue now.

The city stresses, however, that the discussion will not "determine or debate the future home of the statue, but rather to help inform council decision-making on next steps."

Debate about Macdonald first erupted in August 2018 when the city removed a statue of the prime minister from outside of city hall.

At the time, Victoria Mayor Lisa Helps said the removal of the statue was an important step towards reconciliation, and that the statue was causing a barrier to Indigenous participation at city hall. Macdonald, who served as MP for Victoria from 1878 to 1882, played a significant role in creating Canada's residential school system, which displaced thousands of Indigenous youth.

Soon after the statue was removed, Helps issued an apology for the lack of public consultation on the statue's removal, but did not back down from the decision to do so.

The statue of Canada's first prime minister remains in storage.

Monday night's meeting is scheduled to begin at 6 p.m. at the Victoria Conference Centre at 720 Douglas St.

The public dialogue is expected to begin with a "theatrical presentation" on the life and career of Sir John A. Macdonald, and will be hosted by Dr. Cindy Blackstock and Victoria Mayor Lisa Helps.

Anyone looking to participate in the event can register online here. If tickets to the event are sold out, the city encourages anyone who is interested to come to the venue to see if space is still available.