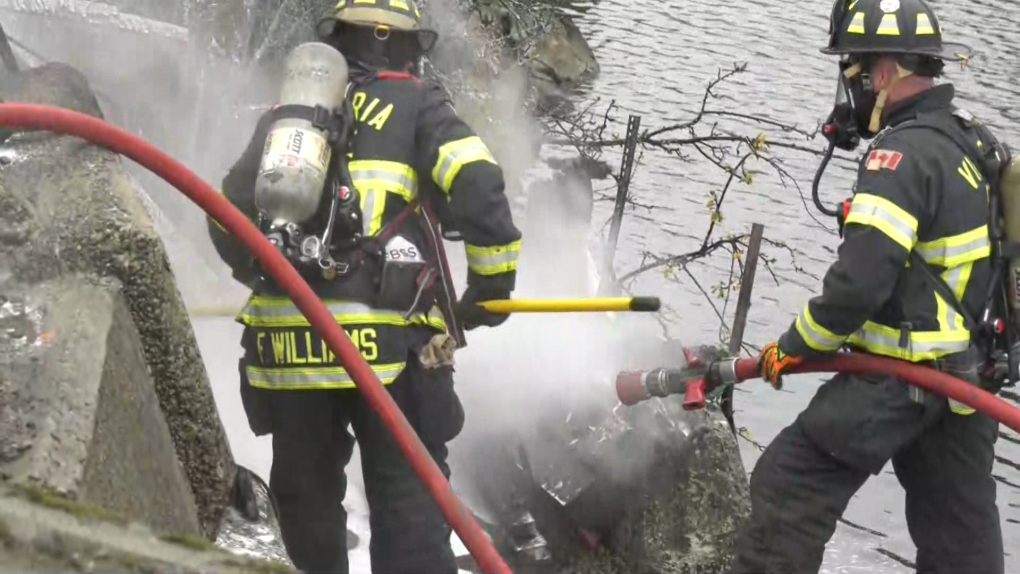 Black smoke filled the sky near downtown Victoria Sunday morning as crews worked to put out a fire at a homeless camp near the Bay Street Bridge. (CTV)

VANCOUVER - Black smoke filled the sky near downtown Victoria Sunday morning as crews worked to put out a fire at a homeless camp near the Bay Street Bridge.

Multiple bystanders called 911 around 10:20 a.m. after seeing signs of the fire near the intersection of Bay and Bridge streets.

When firefighters arrived, they found a homeless encampment burning, according to Gord Taylor, battalion chief for Victoria Fire Department.

"There's a lot of homeless debris down there: shelters, clothing, items that they're using to stay warm at night," Taylor said. "So, it was a lot of fuel for the fire to burn."

Beyond that, the fire was noticeable because of nearby trees and brush, which were also involved in the fire, Taylor said.

"It's close to trees and other brush, so it created a lot of flame and smoke, which is why so many people noticed it and called in," he said.

Crews were able to knock the fire down relatively easily, and there weren't any nearby structures for the blaze to spread to, said Taylor.

The exact cause of the fire is undetermined, he said, adding that the camp was abandoned when crews arrived.

"Probably somebody trying to stay warm at night and probably left to go have breakfast," Taylor said.

No one was injured in the blaze.