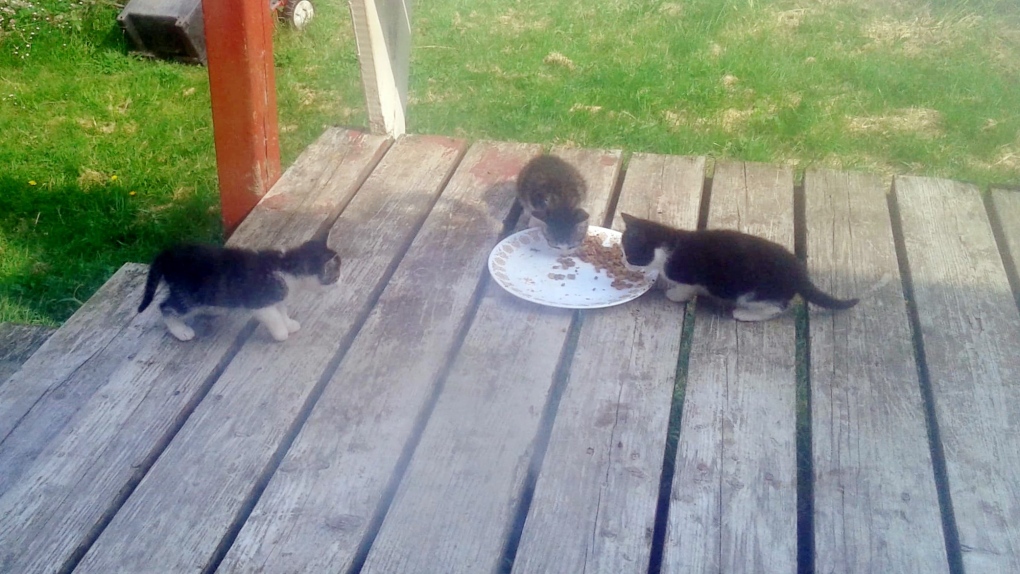 Feral cats gather around the home of Carol Hull in Little Bay Islands, N.L., in this undated handout photo. Residents will move away by the end of this year as the town is resettled, with government services shut down, leaving some animal lovers worried for the feral felines who have come to depend on people for food. (THE CANADIAN PRESS/HO - Carol Hull)

ST. JOHN'S, N.L. - Animal lovers in Newfoundland and Labrador are seeking help for dozens of feral cats facing an uncertain future as the humans in the small town where they prowl prepare to relocate.

Residents of Little Bay Islands have voted to resettle the community, and they have until the end of the year to move before electricity, maintenance and other government services are withdrawn.

Little Bay Islands, off Newfoundland's northern coast, is one of many rural communities in the province faced with a dwindling population and difficult choices - the 2016 census recorded just 71 people living in the town.

As residents grapple with the prospect of leaving their homes behind, the question of what will happen to the feral felines remains.

Carol Hull, in the midst of planning her own move, said that as residents have moved away over the years, some have left their cats. Many of the animals had not been neutered, and Hull said this has produced a lasting population of “semi-feral” cats. She estimates there are between 35 and 40 living in the community.

Hull has been caring for some of the cats, feeding those that come by her property. She's also rescued some kittens and tried to facilitate adoptions. But some of the cats are too wild to be adopted, she said, and time is running out before the human caretakers the cats have come to rely on are forced to leave.

“I can't take them all with me,” Hull said by phone.

Animal welfare groups in other parts of Newfoundland have become involved in the campaign to domesticate and find homes for some of the animals. The Exploits Valley SPCA has started a social media campaign showcasing the 14 cats rescued from the community so far.

In a Facebook post earlier this month, the group highlighted the feral cat problem that isn't unique to the small town, saying that rescue organizations across the province are “overwhelmed” and unable to make space for all the cats in need.

“There's a cat problem in Newfoundland and Labrador (and) the entire world,” the Oct. 6 post read. “Little Bay Islands is no exception, but it poses a problem since it will soon be abandoned.” The group said in its post that some of the cats may starve if the population is left to continue growing on the island.

In following days, the SPCA posted photos of some of the 14 Little Bay Islands cats, most of them kittens, that have since been adopted. But the rest of the free-roaming felines have less certain futures.

Hull said she thinks the government relocation policy should involve some support for abandoned animals. But she worries that government involvement could mean the cats are just put down.

Instead, she's hoping for a bump in funding for animal welfare groups willing to take them in. Hull said as long as volunteers are willing to help her round up the cats, she'll return as many times as it takes to secure their future.

“The main thing to us is (to avoid) the destruction of healthy animals,” she said.

“I'm willing to leave my new home, wherever, and come out here every day of the week as long as there's a rescue group on that boat with me.”

This report by The Canadian Press was first published Oct. 23, 2019.