Evictee surrenders 23 pot-bellied pigs, including pregnant sows, to BC SPCA

Nearly two-dozen pigs ranging from piglets to pregnant sows were surrendered to the BC SPCA after their owner was evicted from a Ladysmith property, officials say.

Cruelty investigator Tina Heary said the SPCA got a call from Mounties after they learned the man and his pot-bellied pigs were facing eviction.

“The owner of the pigs was on the property with his animals and was going to be removed or asked to leave,” said Heary. “There was the need for him to make arrangements for him and his many animals, and I understand he’d been given ample opportunity and advance notice that he needed to make alternate arrangements and hadn’t done so.”

With the deadline for eviction approaching , the man opted to voluntarily surrender the 23 pigs to the Cowichan branch of the BC SPCA Monday night.

Heary said it was a challenge for the branch to accommodate such a large number of livestock, but for now, all of the animals have been accommodated.

“Our shelters aren’t specifically set up to house every species of animal that exists out there, so there are time when we have to take a bit of a backwards step and do some planning,” she said. “In this case, things fell into place towards the end of the day yesterday.”

The pigs range from piglets to weaners, or juvenile pigs, to four sows that are pregnant because the owner didn’t have them spayed.

One of the sows even gave birth to five piglets the morning after it was surrender – but the SPCA says all of the animals appear to be in good health. 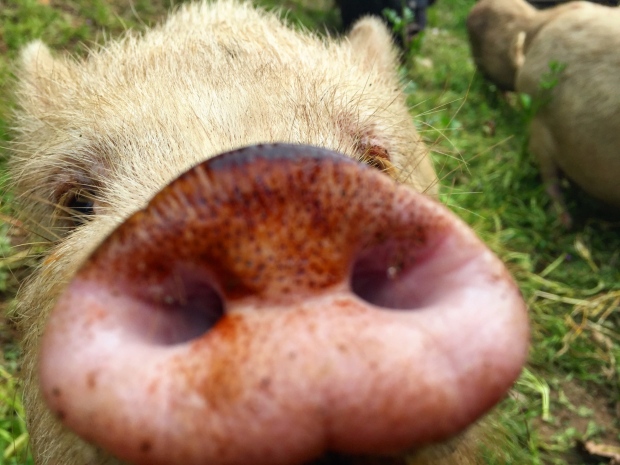 “It was a long evening trying to get them bedded down and sorted out,” said branch manager Sandi Trent. “I’m starting to freak out a little bit, because long-term…it’s a case of having a place to house them that’s going to be safe.”

Trent said anyone thinking of adopting one of the pigs needs to do their research before applying, as pigs require special care that other domestic animals don’t.

The animals can be bred as young as three months, grow in excess of 100 pounds and can live for up to 15 years.

“This is going to be a whole different ball game for us and probably considerably more difficult, because there are a lot of pot-bellied pigs that need homes,” she said. “It’s hopefully a lifetime commitment..”

Heary confirmed the SPCA would be speaking with the owner again Tuesday, but investigators aren’t considering charges yet because he made an effort to surrender them.

The SPCA plans to have the rest of the pigs fixed and is currently coming up with an adoption plan.

For those interested in adopting, “I would recommend that people contact the Cowichan and District SPCA and make some inquiries there as far as what the adoptability options are going to be,” Heary said.

Contact the Cowichan and District SPCA branch in Duncan at 250-746-4646 for more information.

23 pigs and pregnant sows are looking for new homes, after their owner surrendered them to the @BC_SPCA last night. #Duncan @CTVNewsVI pic.twitter.com/7MyPi32TvR 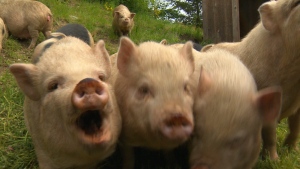