Dozens of puppies in desperate need of foster homes in Victoria

Victoria Humane Society is being overwhelmed with an adorable crisis. Puppies and kittens are flooding into the society’s care and need foster care until they can find forever homes.

The society says the amount of animals coming into its care this year is “worse than ever” since it began operating six years ago. Staff are currently caring for more than 60 puppies, with two pregnant dogs about to add to the count and even more dogs and cats arriving.

“It’s puppy and kitten season," Stone told CTV News. “Up until about Christmas we’ll be getting puppies, pregnant dogs, pregnant cats, and kittens in. This year has been worse than ever.”

Stone says the society has never gotten to the point of turning away animals, but it’s becoming more challenging to accept animals without enough foster space.

“I feel like sometimes we’re playing Tetris," she said. "One of our fosters now has puppies from five different litters, because we were running out [of space] and we had to say yes. We will keep saying yes, and we will keep taking dogs, but we really do need the help.

“If we say no the reality is there’s nowhere else for them to go.”

David Wessels is a foster with Victoria Humane Society foster currently caring for seven pups and their mother. Wessels beamed as he describes the benefits of fostering he sees for both the animals and his daughter.

“We’ve seen puppies and kittens born in the house. She’s seen dogs come in from a terrible situation and leave happy. It’s been a wonderful experience for the whole family," he said.

Fosters house the furry friends as they grow old enough to be adopted, or until they can find a permanent home. Food and medical expenses are provided by the society so fosters aren’t on the hook for any costs of the pets.

Foster times could range from days or weeks for older pups to as long as eight to 12 weeks if fostering a pregnant dog and her newborns. Stone says the humane society is willing to fit people into their Tetris-style plan for whatever commitment they’re willing to take on.

Help can also be given to transport pups to medical appointments, or by donations in the forms of blankets, newspaper or money. 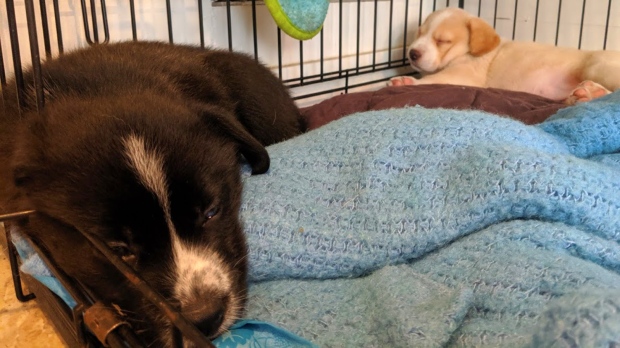