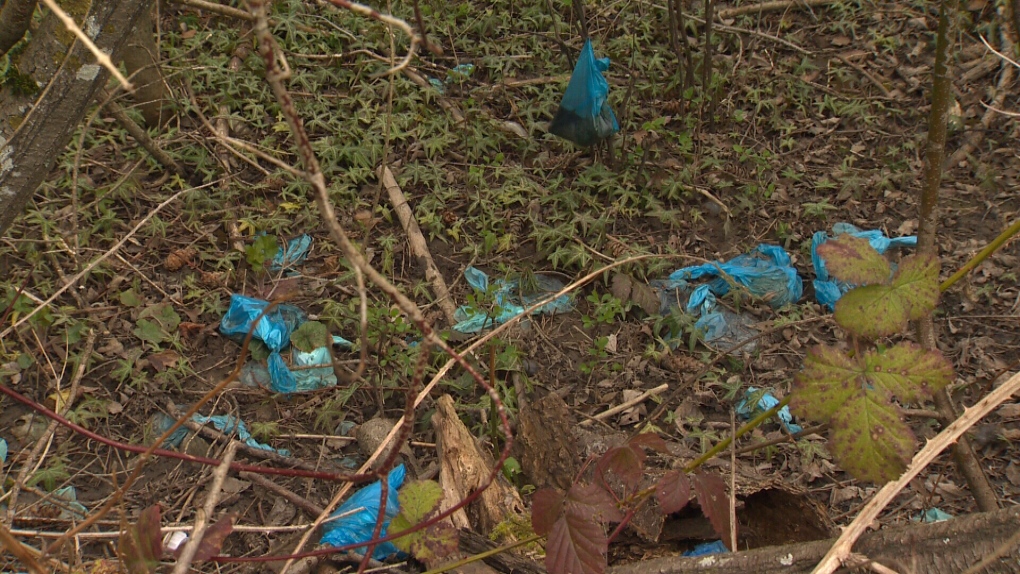 There are bags of dog poop piling up in the bushes near a walking trail in Saanich.

The pile of discarded dog feces was recently discovered by a Saanich woman near a trail on the north side of Vanalman Avenue.

Even though frequent walkers say it’s been this way for at least a year, the Saanich Pound says they’re hearing about it for the first time.

“Well...there’s obviously a problem with somebody disposing of dog feces just in the bush,” said Saanich Pound Inspector Susan Ryan as she looked at the area for the first time.

Ryan called the situation very disappointing and says there’s no excuse for people not to dispose of dog waste properly.

“Even without trash cans provided by the district, people are still required to pick it up and immediately remove it,” she said. “It's their responsibility to find a trash can or take it home with them.”

Under the Saanich animal bylaw, owners are required to immediately remove and dispose of their dogs feces and face a fine of $100 if they don’t.

A photo of the bags in the bushes was posted on Facebook, sparking an online outrage. Many commenters say it's not an isolated event – and there are other areas in the city that have the same problem.

“Yep it's everywhere,” wrote Danielle Ek. “To be honest I'd rather see the dog poop laying on the ground than wrapped in plastic and slung over a tree! Very, very irresponsible.”

Others have commented that the problem is due to ignorance.

“All the time. People seem to think that collecting the poo in a biodegradable bag is equivalent to disposing of it. Wrong,” wrote John Phillips.

The person responsible for chucking the bags of poop is unknown.

The Saanich pound says it will be reporting the situation to Saanich Parks.