VICTORIA -- After more than 30 years of making the 114-kilometre crossing between Seattle and Victoria, the Victoria Clipper One made her last crossing Wednesday.

Built in Norway in 1986, it was the first boat purchased by the upstart ferry service between the two cities.It ended up being the workhorse that built Clipper Vacations into what it is today.

Over the years, Clipper One has carried an estimated eight million passengers on its daily trips between the two tourist destinations.

Captain Jason Mihok got his start on that very boat over 24 years ago. So it was fitting that he piloted the boat on its final crossing, which he called bittersweet.

Other fond memories Mihok will remember are some of the famous people he’s seen on board. People like Roger Daltry of The Who, to members of Heart and even a young Bill Clinton.

“One of my friends said to me, 'That guy is going to be the next president of the United States,'" said Mihok. “I was like, 'Who is that?' Because we'd never heard of him. 'He's the Governor of Arkansas.'"

In 2018, Clipper Five was purchased to replace two aging boats in the fleet. Clipper Five burns less fuel, has better onboard technology and is a bigger boat with nearly double the passenger capacity. 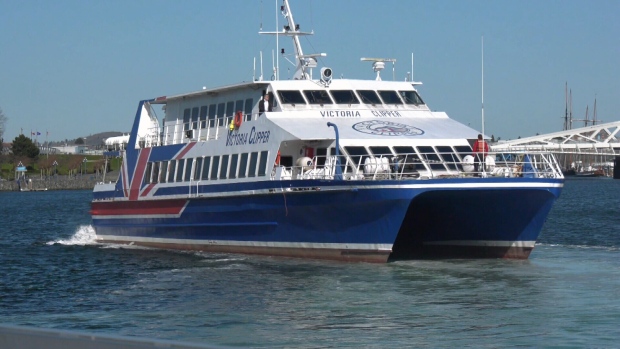 "The Victoria Clipper [One] held 296 passengers,” said terminal manager Brendan Fletcher. “The Clipper Five has 525 seats on board."

Clipper One is leaving the fleet but she’s not heading to the scrapyard. It has been sold to a company in Gabon, where it will be used as a domestic ferry between two major cities.

The boat will go into dry dock at the Point Hope Shipyards for general maintenance before being placed on a heavy lift carrier and transferred to the West African country.