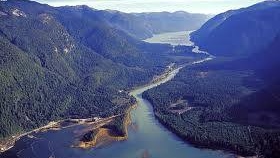 According to the Ministry of Environment and Climate Change Strategy, a report was received that a tanker truck carrying between 7,000 to 8,000 litres of diesel was leaking fluid into the river, due to a crack in a line from one of the trailer units.

The ministry says provincial and federal resources were deployed to the community and containment booms and sorbents were placed around the spill.

The fuel is used for diesel power generators used by a nearby community and is situated where an old cannery is located, according to the ministry.

A release issued by the Wuikinuxv Nation says their administration office was informed of a suspected leak and believes that more than 6,000 litres made it onto the ground and approximately 650 to 700 litres actually reached the inlet.

“The spill is close to three culturally and ecologically rich wetland and estuary sites” the release indicates. “The Emergency Operations Centre, Operations and Maintenance and Stewardship Office are working with federal and provincial partners to assess, contain and clean up the spill.”

A Transport Canada National Aerial Surveillance Program flight was conducted to map the spill and help identify priorities and sensitive areas around the spill site.

Updates for the cleanup efforts can be found on the government’s website here.